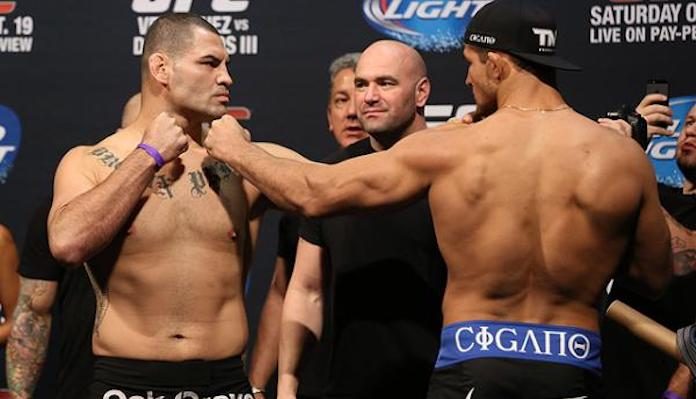 Former UFC heavyweight champion Junior dos Santos is once again in view of a heavyweight title shot, thanks to a nice decision win over Blagoy Ivanov in his last fight. And now that Daniel Cormier has defeated Stipe Miocic, who derailed dos Santos’s title dreams in 2017, the path to gold looks even clearer.

In terms of his next fight, Junior dos Santos has a few options. One option is rising Australian contender Tai Tuivasa, who he’s gone back-and-forth with on Twitter. Another, he believes, is former champion Cain Velasquez, who he’s 1-2 with across three previous bouts.

Despite the lopsided losses Junior dos Santos endured in his second and third bouts with Velasquez, he’d be interested in meeting the former champion once more. That is, if anybody can figure out where the heck he’s been.

”Not that I’m choosing, I’ve said thousands of times that I don’t choose opponents,” dos Santos told MMA Fighting. “For an example, we have [Tai] Tuivasa, who beat [Andrei] Arlovski. There are several options at heavyweight. Even [Cain] Velasquez. I don’t know what’s his status. People talk and talk about him, but he’s been out for years and no one understands it. The UFC has several options to book my next fight.”

Whatever the case, Junior dos Santos is optimistic that, with a few more wins, he’ll have another chance to reclaim the title.

I’m not worried about trying to guarantee a fight for the belt because that’s automatic, it will happen,” dos Santos said. “I’ve always done my best inside the Octagon, fought the best there is, and win or lose I’ve done my best in my fights. If I’m not the champion today, it’s because of mistakes I’ve made. My opponents have merit, too, of course, but the experience I’ve gained was great. The price I had to pay for that experience was high sometimes, I stayed out for a while, but I’m rebuilding.

”That’s what I’m here for. I’m motivated. I’m 34, but I’m feeling stronger, in a special moment in my career, more mature and motivated. It’s inevitable that I will fight for the belt again. It will come eventually, there’s no escape.”

Who do you want to see Junior dos Santos fight next?