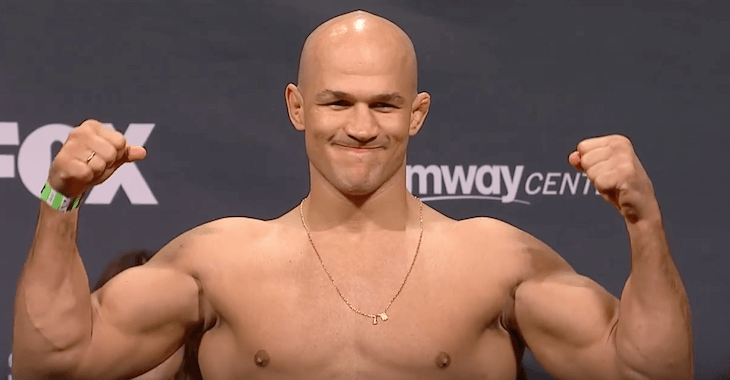 At one point in time, former UFC heavyweight champion Junior dos Santos was once regarded as the ‘baddest man on the planet‘. Now, following a unanimous decision win over Ben Rothwell back in April, dos Santos will be looking to move one step closer to a heavyweight title fight when he steps into the Octagon with Stefan Struve in February.

While ‘The Skyscraper’ is currently on a 2-fight win streak that has seen him KO Bigfoot Silva, and most recently submit Daniel Omielanczuk with a D’Arce choke, he is currently ranked at #11 on the UFC’s official rankings. With that being said, Junior Dos Santos, who is ranked at #4, knows the fight is a risky one. Unfortunately for ‘Cigano’ however, the rest of the heavyweight division hasn’t been chomping at the bit to share the Octagon with him.

“He’s coming off a good moment, good wins. He’s right there around the top 10 and I’m sure it will be a great fight.”

For Dos Santos of course, the goal is to once again reclaim the UFC heavyweight championship. The way he sees it, he has earned it: “It’s not about whether I’m asking for it – I think I deserve it,” Dos Santos said. “I’m coming off a win over Ben Rothwell, the guy who was going to fight for the belt even before Alistair Overeem, had he beat me. He didn’t. I won the fight, so he fell a couple of spots. And I ended up not climbing any.

“So it’s not that I wanted to fight Miocic, I was deserving of it. Velasquez and Werdum both come off wins over Travis Browne, who wasn’t close to fighting for the belt. So, given all these factors, I think I deserved it. But unfortunately it couldn’t happen now. I know it will happen and it won’t be too long before it does. My goal right now is to perform well.”