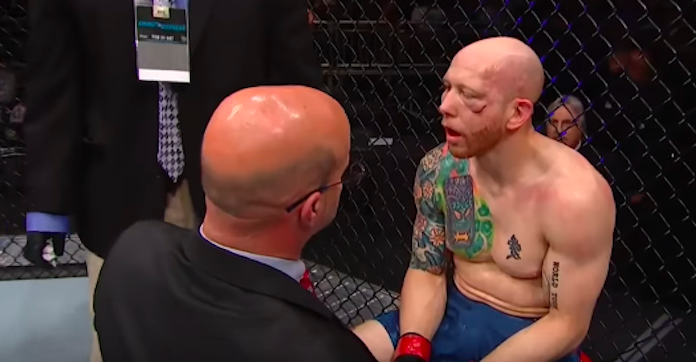 On Saturday night, the UFC returned to beautiful Orlando, Florida with a thrilling 12-fight card. In the main event, cinderblock-fisted featherweight contenders Jeremy Stephens and Josh Emmett collided in a fight that had Performance of the Night written all over it. In the end, this fight met those expectations, with Stephens coming out on top in the most vicious way possible.

After a close first round, Stephens found the opportunity to do what he does best. After wobbling his foe with a punch, he punished him with a series of questionable elbows and knees (many onlookers felt they were illegal as they seemed to land on the back of the head), and a salvo of absolutely brutal ground punches. Seconds later, Emmett was supine on the canvas, staring lifelessly up at the jumbotron, as a triumphant Stephens paraded around the Octagon. (Relive the finish here).

As it turns out, this knockout loss, which is the first of Emmett’s impressive career thus far, is likely to leave him sidelined for some time. Post-fight, ESPN’s Brett Okamoto shared an update on Emmett’s condition, and it’s grim…

The Team Alpha Male staple is apparently coping with an orbital bone fracture in a whopping three places. Suffice it to say that when Jeremy Stephens hits you, you’re liable to wake up with a facial anatomy reduced to bruised tissue and bone dust.

Per his team, Josh Emmett suffered three fractures to his orbital bone tonight. This sport is no freaking joke.

As Okamoto says in his Tweet, this sport is no freaking joke…

Here’s hoping Josh Emmett makes a speedy recovery from this undoubtedly painful injury. At just 32-years-old, and with only 15 fights to his name, he’d seem to have plenty of time to bounce back.