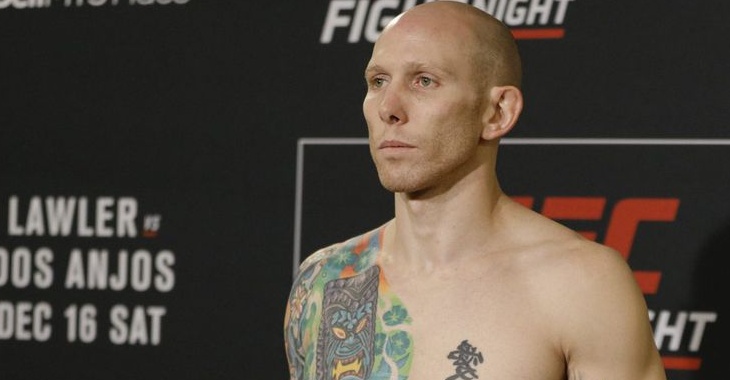 Very few fighters capitalize on opportunities the way that Josh Emmett did at UFC on Fox 26 in Winnipeg, Canada. Emmett was a replacement for former UFC featherweight champion, Jose Aldo who pulled out of his rematch with Ricardo Lamas to fill in for the injured Frankie Edgar against current champion, Max Holloway at UFC 218.

Going in as the obvious underdog, the unranked Emmett shocked everyone and all it took to do so was one punch. Emmett landed a flush left hand that put his opponent, former title challenger, Lamas to sleep and shot him right up to the ranks of the 145-pound elites.

Emmett now finds himself positioned for potential stardom. He will be headlining his very first UFC card and will be doing so alongside Jeremy Stephens at UFC on Fox 28 in Orlando, Florida. Emmett spoke to FloCombat about the matchup and what a win could mean for the new contender:

“It’s going to be a tough fight. This is going to be the biggest fight of my career to date. I think it’s going to be my toughest opponent so far too. He’s a legend of the sport. He’s been in the UFC almost 11 years. He has over 40 pro fights, 27 of them coming in the UFC. I think I match up great with Stephens. The only thing is, it’s going to be more similar to me fighting myself. I feel like we both come from a wrestling background, both have [a] good ground [game] but people haven’t got to see too much. We both have good striking, we’re both extremely powerful and explosive. And we’re going to find out who hits harder on February 24.

I believe it [a win] does [lead to a title shot]. I feel like this is the title eliminator right here. Like I said, Stephens is a pioneer, a legend of the sport, he’s fought the who’s who. He’s climbing the ranks and I feel like the winner of us gets a title shot. We’re both coming off of impressive wins; we’re both in the top 10. After I beat Stephens, the UFC, the fans, they won’t be able to deny me that title shot.”

Jeremy Stephens is also a fighter coming off a very nice knockout win. His being over the “Korean Superboy” Doo Ho Choi just about a month ago at UFC Fight Night 124 in St. Louis. Emmett’s was obviously more impactful then Stephens’ recent win but  Emmett explained that they’re all the same to him.

“I just knew it was over. As soon as I connected I could feel…I don’t know, it’s different. Sometimes when you hit someone so hard, I could feel the punch through my glove into my knuckle and I just knew. I looked and he had fallen straight over and that’s why I just walked away. There was no need to hit him while he was already out.

It was another fight to me. I feel like I’ve been fighting my whole life. I’ve been fighting for a while. It feels the exact same like, nothing’s changed. The only difference is I have a No. 4 next to my name now. To me, I’ve competed, I’ve wrestled my whole life. I’ve upset the No. 4-ranked guy in the country in college. Ranking means absolutely nothing to me. I guess the only good thing about it is as you win fights, you get closer to the title. That’s what they’re there for. Anyone can lose on any given day.”

This win put Emmett on a two-fight win streak and turned his record to 5-1 inside the Octagon(and that’s only since entering in 2016).

Who do you have in this exciting featherweight main event next week? Will Emmett get a title shot if he wins? What about Stephens?