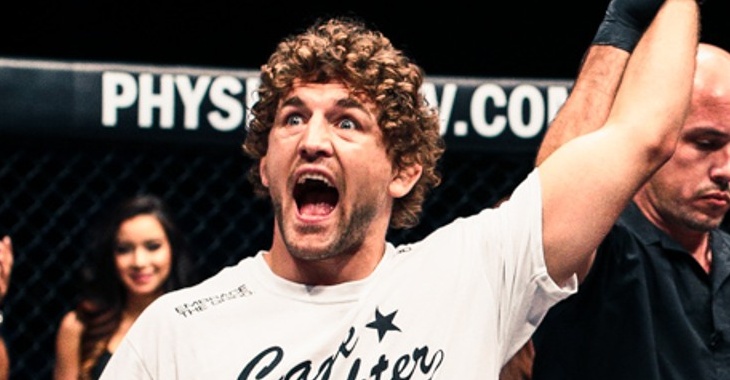 The “UFC” and “Ben Askren” have never been two things that have been synonymous with each other. At least not in a positive light…

But lately, now that Askren is free of fighting obligations as a “semi-retired” fighter, talks between fans and pundits have heated up, maybe more so than ever before. Including from Askren himself who has stated he wants to fight Georges St-Pierre and that that’s the only fight that could make him come back. Askren even stated recently that he believes the fight will happen by next year.

Among those interested in seeing the former Bellator and ONE welterweight champion compete in the UFC is longtime UFC commentator, Joe Rogan who when talking about Askren on his podcast recently had this to say:

“I’ve talked to Dana [White] about it(signing Askren) in the past. I think if Ben and him sat down and I could be there, maybe I could help. I’d do that. I’d be 100 percent willing to do that.”

Then today, this quote was used by the UFC on Fox official Twitter page for this post…

Would you like to see @BenAskren bring his talents to the @UFC in 2018? pic.twitter.com/29mZfKTtWj

Would you like to see @BenAskren bring his talents to the @ufc in 2018?

Surely seeing this on an official UFC Twitter page came as a surprise to most. Askren himself included:

Wow bizarre UFC on FOX posting about me, maybe they know something I don’t…. https://t.co/P56I2Sp1ig

Wow bizarre UFC on FOX posting about me, maybe they know something I don’t….

It will always be a little bit crazy for hardcore fans of MMA to think that someone as skilled as Askren never fought in the world’s number one organization. But maybe if we’re lucky that wont end up being the case.

“For me, it’s a no-brainer,” Rogan continued. “You want to see the best versus the best, and he’s been able to do weird sh*t to people… He’s f*cking super articulate, super smart, a f*cking great guy. I don’t know jack sh*t about promotion, I could be wrong. I might just be such a purist that I want the best to fight the best so much that I don’t give a f*ck what it looks like.”

Askren’s last MMA fight came against Japanese MMA legend, Shinya Aoki in November who Askren only needed fifty-seven seconds to defeat thus closing out his career with a flawless 18-0 record.

What do you make of this tweet from UFC on Fox? Is Askren playing dumb with his response? Could they be in talks already?