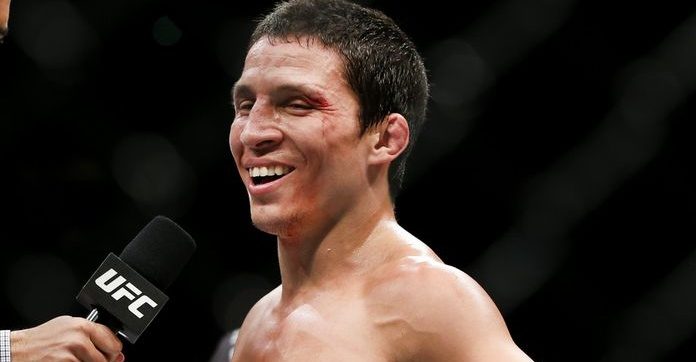 A pivotal flyweight bout between Joseph Benavidez and Jussier Formiga served as the co-headliner of tonight’s UFC Minneapolis event.

Meanwhile, Joseph Benavidez (27-5 MMA) was most previously seen in action at January’s UFC event in Brooklyn, where he defeated Dustin Ortiz via unanimous decision. Prior to his win over Ortiz, Benavidez had earned a first round TKO victory over Alex Perez.

It is expected that tonight’s winner will be the next man to challenge current UFC flyweight title holder Henry Cejudo… eventually (more on that here).

Round one of the UFC Minneapolis main event begins and Joseph Benavidez snaps off a pair of good kicks to the body. Formiga with a nice counter punch as Joe gets a little aggressive. Jussier sticks and moves. Benavidez attempts to close the distance but Formiga catches him with a hard right that cuts Joe open. Still, Benavidez continues to press forward. He lands a pair of left hands. Formiga lands a hard kick to the body. Benavidez shoots in and takes the fight to the floor. He gains full mount but Formiga quickly scrambles free and gets back to his feet. Wow. The horn sounds to end round one.

Round two begins and the crowd at UFC Minneapolis seems to be enjoying this one. Joseph Benavidez with a nice body shot that lands. Both men with shots from the pocket. Formiga ducks a punch and lands a nice takedown. However, Benavidez immediately scrambles and takes top position. Jussier is looking to scramble free and he does. Formiga is back to his feet and Benavidez catches him with a nasty low kick. He follows that up with a pair of kicks to the body and then one to the head. Formiga is hurt. Joseph Benavidez unloads a flurry of punches and this one is all over. Wow!

Do you think Joseph Benavidez should get the next shot at current ‘champ champ’ Henry Cejudo following his impressive victory at UFC Minneapolis? Sound off in the comments section PENN Nation!