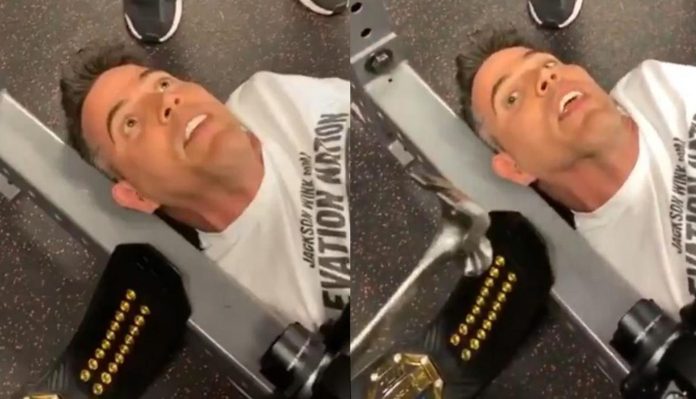 Jon Jones once tried giving Steve-O cauliflower ears and the result was quite brutal.

Jones and Steve-O have become quite chummy and the two agreed to do a Jackass-esque stunt where “Bones” would attempt to give Steve-O cauliflower ears. What followed next was a bloody scene.

During an appearance on Daniel Cormier’s Multifaceted podcast, he detailed the scary experience (h/t MMAMania.com).

“Jon Jones had a try at giving me cauliflower ear,” Steve-O revealed to Daniel Cormier during his podcast Multifaceted. “So we’re at Jon Jones’ house and he’s got these barbells with the weights.

“We put my ear in between the weights, the big round ones on the thing and he’s elbowing them and my ear comes out of there and he says ‘that’s it, you’ve got it, that’s cauliflower ear’, and then a few days later, nothing happened.”

Steve-O says Jones then took a hammer and things went south from there.

“So the last thing we did, on one of his workout machines I put my ear on the metal base bar,” he continued. “He puts his light heavyweight championship belt and he puts in on my ear on this metal thing and he’s hitting it with a hammer.

“A full-blown, Home Depot hammer and it seems like everything’s cool and in this footage the hammer hits it and all of a sudden, one hit, blood just splatters from underneath this belt. We all freaked out.

Steve-O said that looking back on the experience, he found the whole thing to be awesome. He said he’s glad the ordeal was caught on video.

His enthusiasm shouldn’t come as a surprise to many. Steve-O has made a name for himself off of getting hurt, so this little mishap may have not even been the worst experience he’s had.