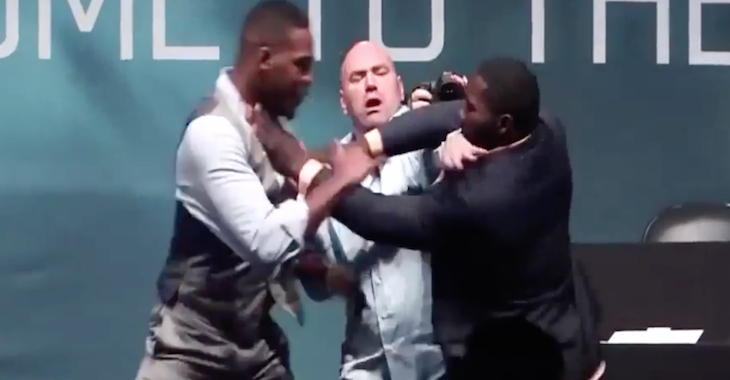 With that said, one name that has eluded Jon Jones spectacular resume is former division title challenger Anthony “Rumble” Johnson.

The pair, Jones and Johnson, were actually slated to meet at UFC 187 in May of 2015. Unfortunately for fight fans, that fight failed to come to fruition after “Bones” was involved in a hit-and-run incident.

“Rumble” would go on to fight Daniel Cormier at UFC 187 for the promotions vacant light heavyweight title, where he ultimately suffered a third-round submission defeat to “DC”.

Johnson, who is considered by many to be the scariest knockout artist in the history of the light heavyweight division, retired from the sport following his second submission loss to Daniel Cormier at UFC 210 in Buffalo.

Since that time, “Rumble” has taken up body building and put on a ton of muscle.

Jon Jones and Anthony Johnson once again crossed paths this weekend at a Gat Supplements event, which resulted in the epic square off you see below.

“Day one with @gatsupplements has been unbelievable, so grateful for all the support. Stoked about tomorrow. See you guys in the AM.” – Jon Jones

Jon Jones is currently waiting for USADA to rule a punishment regarding his failed drug test which occurred after his UFC 214 fight with Daniel Cormier.

It is believed that the UFC is hoping to have the former light heavyweight kingpin return to headline November’s UFC 230 event at Madison Square Garden in New York City.

Who would you like to see Jon Jones fight in his next octagon appearance? Sound off PENN Nation!