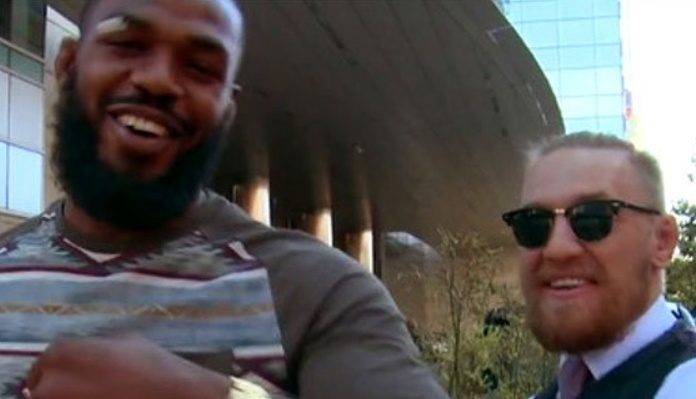 When it comes to the big stars in MMA and more specifically the UFC, the names come few and far between. Which in a way can make them stand out even more.

One of those among the big-name stars in the UFC hasn’t been in the spotlight all that much the past few years…or he has but for the wrong reasons.

Former light heavyweight king Jon Jones has been battling issues with USADA more frequently than he has been with actual fighters.

However, the 31-year old still expects he will fight again someday soon. And when he does return, a fellow MMA star has given him some inspiration to reach new heights as he told Allow Me to Interrupt in a recent interview.

“Conor McGregor has definitely inspired me to reach for bigger fights. The higher the risk, the higher the reward. That’s my plan. Take a page out of his book, and start challenging myself against some pretty scary dudes.”

Of course, the Irishmen is currently set to try and overcome another high risk, high reward scenario when he challenges for the lightweight title that he was stripped of due to inactivity.

At UFC 229 on October 6, Conor McGregor will finally be facing the champion Khabib Nurmagomedov in what’s expected to go down as the biggest fight in MMA history.

Having fought in his fair share of massive moments, Jones gave his take on the huge lightweight title affair.

“I believe Conor McGregor has wrestling, I don’t think it’s at the level of Khabib. I think Khabib will get most of the takedowns he goes for, but Conor’s an athlete. He shouldn’t be underestimated. I think Khabib, his boxing defense is not the strongest, and I also don’t understand why he doesn’t work a lot of jiu-jitsu. If you can take down anybody, why not know how to finish them? He depends on ground and pound and he never finishes anyone with that. Khabib’s a blackbelt wrestler, if he adds a black belt in jiu-jitsu to his recipe, he’d be extremely scary.”