‘Bones’ announced his intentions on social media and instantly had fight fans salivating over the potential matchup. Even Jones’ longtime rival and former opponent in Daniel Cormier labelled the callout as being “a gangster move”.

Despite both Jon Jones and Francis Ngannou seemingly being onboard for the super-fight, and the obvious interest from fight fans, the UFC was not willing to open up their pocket book in order to make the contest come to fruition.

Jones was clearly frustrated by the news calling the situation “unbelievable” and then suggested that he may take a one or two year hiatus from the sport.

The UFC’s reluctance to fork over some more cash for the proposed super-fight does come as a bit of a surprise. The promotion would have undoubtedly done massive numbers off a Jones vs. Ngannou pay-per-view event.

Fighter pay in mixed martial arts has always been a hot topic, and when UFC is not willing to spend a little extra in order to book a super-fight for one of their biggest stars it only rubs salt in that wound.

While Jon Jones has unquestionably done well for himself financially, this for being one of the sports biggest attractions, his paydays still pale in comparison to that of any notable Boxing star.

As pointed out by The Athletic’s Greg Rosentein on Twitter, the difference between fighter pay in Boxing and Mixed Martial Arts is still nothing short of staggering.

It's still staggering to me the difference in fighter pay between MMA and boxing.

As noted above, Jon Jones purse for his UFC 247 title fight with Dominick Reyes was $500,000. In comparison, multi-division boxing champion Canelo Alvarez took home a whopping $35 million for his recent win over Sergey Kovalev.

While ‘Bones’ would have received pay-per-view points for his event headlining bout with Reyes, that additional income would still not put him anywhere near the realm of a Canelo Alvarez payday.

In fact, the only mixed martial arts star who has made any where close to the numbers of their respective boxing counterparts has been Conor McGregor. 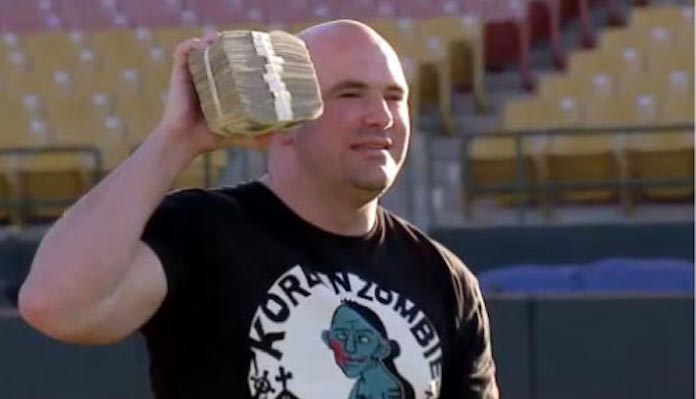 While the Ultimate Fighting Championship has reported huge earnings in recent years, the promotions fighters still don’t appear to reaping any of the rewards.

Many of the athletes on the UFC roster actually have to work part-time jobs in addition to training full-time as a mixed martial artist.

Those struggles are extra hard to swallow when fighters see their boss flying in snow for their kids Christmas celebrations in Las Vegas. Although Dana White and company have obviously done a fantastic job turning MMA in to a main stream sport, and thus should reap the rewards of their hard work, so too should the fighters who are shedding their blood inside of the Octagon.

In the end, if the UFC is not willing to cough up some extra cash for a Jon Jones vs. Francis Ngannou bout, it is not likely that any other fighters will be reaping rewards from a successful 2019 campaign anytime soon.