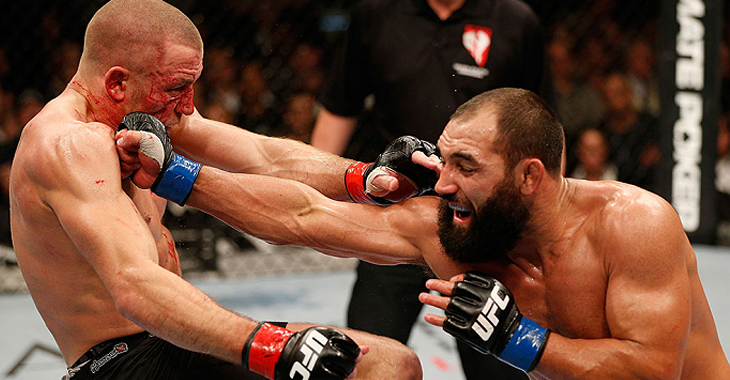 Georges S-Pierre’s last fight in the Octagon was against Johny Hendricks at UFC 167 back on November 16, 2013.

Now, with “Rush” and the UFC working out an agreement for the former welterweight champion to compete in the Octagon again, Hendricks is looking to get his rematch after their extremely close first fight that ended in a split decision win for St-Pierre. “Who would want to see him and Bisping, or me and Bisping? I’m pretty sure the whole world would much rather see that,” Hendricks said after his successful middleweight debut (transcribed by MMA Junkie).

UFC President Dana White told the LA Times that UFC middleweight champion Michael Bisping is one of the potential opponents for the return of GSP.

“It could be the winner [of the March 4 welterweight title fight] between Tyron Woodley and Stephen ‘Wonderboy’ Thompson, or it could be [middleweight champion] Michael Bisping,” White said. “Georges has also talked about fighting at 155 pounds [lightweight]. He says he can make the weight.”

Hendricks is hoping that he doesn’t have any serious injuries and will be able to fight when the UFC heads to Texas, the state he now calls home.

“I’m hoping that I’m injury free enough,” he said. “I’m going to check on my hand. I think it’s a stinger. It still hurts. It feels like the little bones in between my bigger ones.

“If I had three months to fight in Dallas, that’s plenty of time, because I could get a strength and conditioning coach that can get me to where I need to be.”

With Hendricks looking to get his rematch against St-Pierre, “Big Rigg” had a message for the former champion and his Canadian fans. “I would just say sorry for the Canadians,” Hendricks said. “I’m going to have to beat his face in, definitely if he comes to 185. Because that’s a fight that I’ve been really looking for. And now that I’ve got a win under my belt at 185, he’s a newcomer at 185.”

Would you like to see the rematch between Georges St-Pierre and Johny Hendricks? Let us know how you think the fight would go in the comment section!