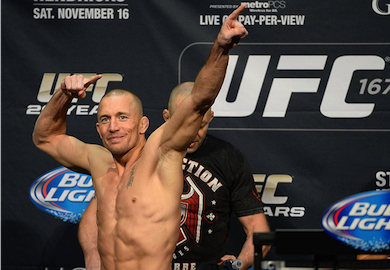 We saw action from the get-go in the first round. Hendricks threw a hook that St. Pierre saw coming from a mile away and he countered it by ducking down and successfully landing a takedown. Later on in the round, Hendricks knew St. Pierre would duck under so he followed his hook with an uppercut which landed. St. Pierre was in real danger and ate a lot of shots but he made it to the end of the round safely.

St. Pierre almost walked into another knockout situation in the second round. Hendricks wobbled St. Pierre with a left uppercut and he followed up with a barrage of punches. Most of them landed but St. Pierre refused to give up and continued to stay standing. Hendricks couldn’t finish the bout and they exchanged blows for the remainder of the round, neither man connecting flush.

Fatigue started to rear its ugly head in the third round for Johny Hendricks. After every single missed power punch, Hendricks would shrug his shoulders and take a big breath. St. Pierre opted to utilize his superior conditioning and started to turn the volume of strikes up. He connected with a head/body combination multiple times throughout the round that undoubtedly tired Hendricks out even more than he was at the start of the round. Hendricks shot for a takedown and successfully landed it, but St. Pierre popped back up to his feet seconds later.

Moving into the championship rounds, you would assume Hendricks would tire even more. However, he seemed to have caught his second wind in the fourth round. Hendricks landed a takedown and connected with some sharp elbows that cut his opponent open. St. Pierre was able to get back to his feet, but continued to absorb powerful punches. The round ended with St. Pierre pinned against the cage and we walked into the fifth round not having a clue who would walk out with the championship.

St. Pierre could have possibly locked up the fifth round with two takedowns, but nothing came of them as Hendricks popped right back up to his feet. A majority of the round saw both men jockeying for position, pinning each other against the fence looking for takedowns.

After all five rounds were said and done, it was difficult to predict who the victor was. Both St. Pierre and Hendricks walked into the fifth round with two rounds to their name, and it was an extremely close fifth round. Both fighters exchanged octagon control but it was ultimately St. Pierre’s quantity of strikes landed throughout the fight and two takedowns in the fifth round that secured his victory.

After the judge’s decision was announced, St. Pierre’s arms were raised and Hendricks was on the mat in disbelief.