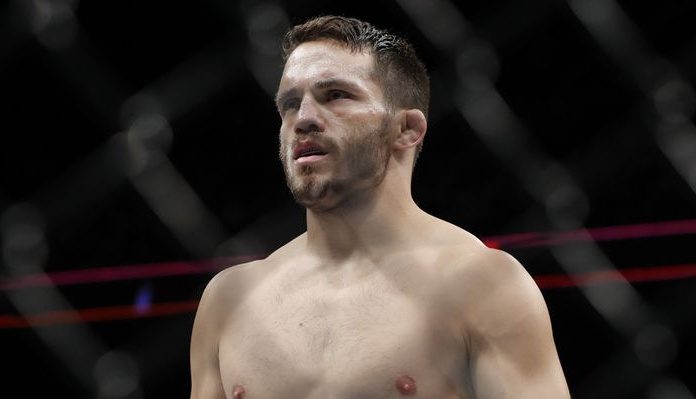 We’ve been without the UFC since UFC 227 at the beginning of this month, but next week they’re back with a bang in Lincoln, Nebraska.

Before the highly anticipated guaranteed fireworks that is Justin Gaethje vs James Vick in the night’s headliner, we’ll be treated to plenty of fun matchups. One of which includes the welterweight veteran Jake Ellenberger who will be making the walk to the Octagon for the 21st time.

There was once a time where Ellenberger looked to be the next big thing at 170-pounds and was even touted as possibly the man to dethrone Georges St-Pierre. But as we know, nothing lasts forever in this sport.

Since July 2013, Ellenberger has gone 2-8 and currently rides a three-fight losing streak that consists of all KO/TKO losses.

The 33-year old Omaha native reflected on his most recent loss to Ben Saunders in June when speaking with Submission Radio.

“It’s like, I should never lose to a guy like Ben Saunders. Ben Saunders is not…he’s not a world-class fighter. That’s just not a guy I should ever lose to. I shouldn’t lose to him on my worst day.

Like, that’s just me being real. And I would tell him that to his face. I am a hundred times better fighter than he is. And he knows that. But at the end of the day, I f*cking got lazy, I got complacent, he caught me. Time to move on. But it’s like, if you want to judge a fighter by the passion they have, the fire they have inside them, it’s like, let’s go. I’ve never had more fire than I do right now. It’s like, people wrote me off a long time ago. I don’t even care about that. It’s, I’m fighting for me and I welcome it. I can’t wait for next weekend.”

Due to Ellenberger’s recent misfortune, some may find it as a surprise that he still remains on the UFC roster as many fighters have been cut for less.

Heading into his upcoming bout next Saturday, Ellenberger isn’t concerned as to whether his spot on the roster will be on the line.

“In reality, your job is always on the line. It’s like, nothing’s for sure. Nothing’s ever certain in this sport, especially in Mixed Martial Arts. But it is what it is. Every fight is different, every fight you feel a different emotion, you gotta manage different emotions.

And for me it’s, I don’t look at it that way at all. Was there a time that I did? Sure, sure. But not right now. Right now I really enjoy it again and I really just have that fire and I’m really looking forward to next weekend. So I take it one fight at a time. I don’t look past that. So, it’s one of those things. Like I said, there’s not a lot of certainty right now in this sport.”

At UFC Lincoln, Ellenberger will take on the always game, Bryan Barberena who is looking to rebound off of his September loss to Leon Edwards.

Ellenberger shared his thoughts on his opponent.

“Yeah, he’s tough, he’s a grinder, he’s gritty for sure. There’s not anywhere he’s spectacular, but I think he stays in the fight. He’ll grind and he’ll stay in there for three rounds. So, you know, there’s a lot of openings, there’s a lot of areas I could take advantage with him specifically, but no, great opponent.”

Ellenberger and Barberena will be the third bout on the main card of UFC Lincoln.