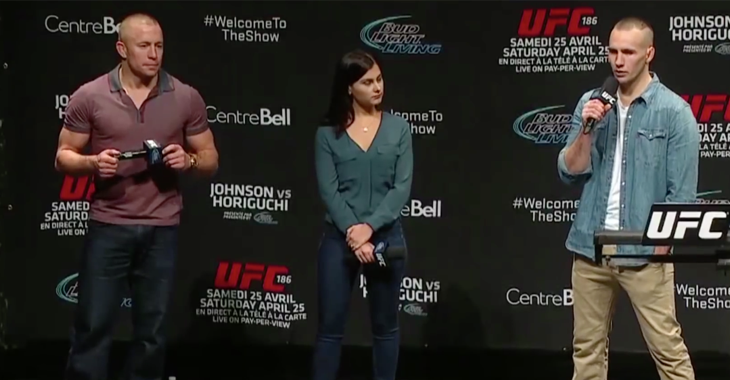 Former UFC welterweight kingpin Georges St-Pierre is set to make his return to the Octagon after being away from competition for nearly four years.

“Rush” will be going up a weight class from the 170-pound welterweight limit up to the 185-pound middleweight division and take on current UFC middleweight champion Michael Bisping for his title.

Rory MacDonald, who will be fighting Douglas Lima for the Bellator welterweight title in January, has been a longtime training partner of St-Pierre and spoke with MMA Junkie on his return to competition. “It will be hard to say, because we haven’t seen him in a while,” MacDonald said of St-Pierre. “That’s the exciting part.”

With St-Pierre’s last fight being in 2013 and now set to fight in November in a new weight class, MacDonald isn’t so sure of the move to the higher weight class but respects his teammate’s decision.

“The 185 thing, I probably wouldn’t have advised it, but he is his own guy,” MacDonald stated. “He has his own goals. He’s obviously very talented.

MacDonald added that with being away from competition for so long, it will be interesting to see if “Rush” will surprise people with new techniques or if he will revert back to his typical style of mixing striking with wrestling. Either way, MacDonald said, “I hope for the best.”

How do you think Georges St-Pierre will do in his return to the Octagon against Michael Bisping? Let’s get your prediction in the comment section on how the fight plays out.