Kazushi Sakuraba Will Grapple Frank Shamrock for RIZIN Next Month

Wild things are a’brewing overseas. If you’re not familiar with RIZIN, it’s the phoenix that rose out of PRIDE Fighting Championship’s ashes. It reliably puts on exciting cards complete with pyro and lasters, Japanese MMA nostalgia, and new blood that could possibly be the future of combat sports. In addition to some wild action you may not see anywhere else, living legend and recent UFC Hall of Fame inductee Kazushi Sakuraba will grapple Frank Shamrock on their October 15th card.

ダン・ヘンダーソン選手がケガにより欠場。代わりにフランク・シャムロック選手が参戦！
Dan Henderson has been out due to an injury, but instead, Frank Shamrock will participate in. pic.twitter.com/CvnmMJZ4uM

Originally, Sakuraba was slated to have an exhibition grappling bout with MMA’s Paul Bunyon, Dan Henderson. Unfortunately, he’s out with a neck injury but Frank Shamrock has stepped up into his place. Hopefully we don’t have to go into too much detail on how Sakuraba is the freaking man. Much like BJ Penn, he constantly jumped into crazy fights undersized and usually won. He single-handedly took out an entire wing of the Gracie family, including Royce Gracie, back when an invincible aura surrounded them.

Frank Shamrock might as well be an MMA architect in his own right. Aside from his rich history in combat sports roots competing in Pancrase, he was the first ever UFC light heavyweight champion and the first fighter to hold belts in UFC, WEC, and Strikeforce. He retired from competition back in 2009 after a loss to Nick Diaz. This will be the second grappling match RIZIN has put on, their last one being a tag-team bout between Sakuraba and Hideo Tokoro against the team of Wanderlei Silva and Kiyoshi Tamura. 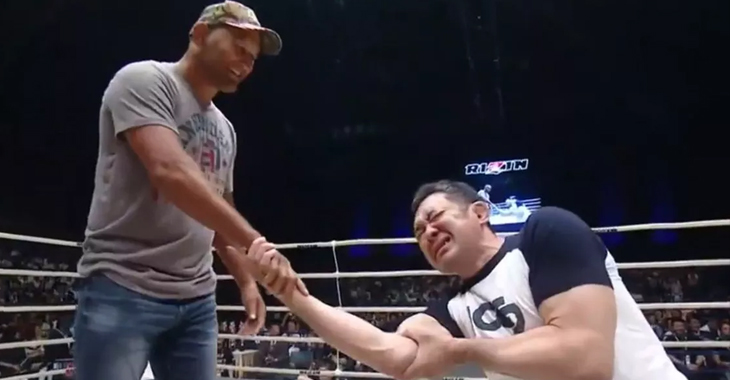