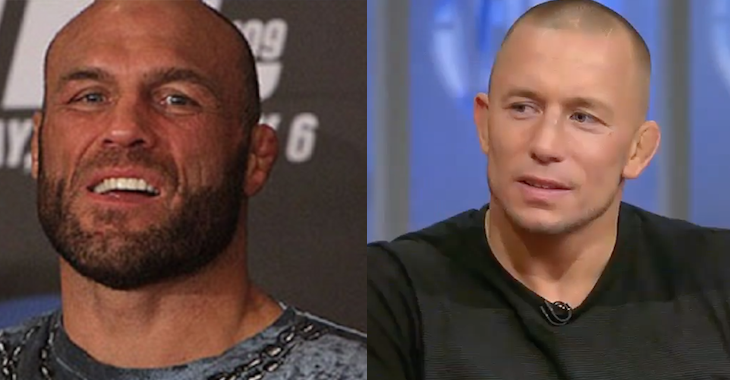 Georges St-Pierre may be in for the biggest fight of his life and it won’t even be close to taking place in the Octagon.

On Monday, the former UFC welterweight kingpin announced on The MMA Hour that he was a free agent after his legal team terminated his contract with the UFC. Later that day, the UFC released a statement saying that St-Pierre was in fact still under contract with them. One man who has had a bit of experience with contract disputes with the promotion is one of their Hall of Fame legends. Former UFC heavyweight and light heavyweight champion, Randy Couture spoke about his past with fighting with the UFC in court, to which even the two-division UFC champion could not compete with.

“They’re going to hire the same lawyers and do the same thing to keep Georges in line and keep Georges fighting for their brand,” Couture recently told MMA Junkie.

After having some issues with the UFC, “The Natural” had tried his best to get out of his contract and was looking to put together a fight with Fedor Emelianenko, which would have been a big superfight at the time. However, the battle in court proved to be too much for Couture. “I settled because I was 45 years old,” Couture said. “They were going to drag it out as long as they could and basically try to bankrupt me. I’d already spent $500,000 of my own money to pursue getting away and being able to make the biggest fight of that time happen.”

With the push on fighter’s unions being formed and the fight for MMA fighters to be included in the Muhammad Ali Boxing Reform Act, Couture says that with more unity amongst the athletes, big changes in favor of the fighters can happen.

“As independent contractors, we have a lot of power if we unite, and the promotions like the UFC or WME don’t even know, to be honest,” Couture stated. “They would have to listen, because without the product, without the fighters, there are no fights. It may take something that significant, to walk out, to pull out, to get them to change their business practices, because their business practices aren’t fair. The fact that they sold that company for $4.4 billion is a big wakeup call for all the fighters who’ve been lending their blood, sweat and tears to building that brand over the years.”

“A lot of these problems get solved with these contracts and the promotion’s power over fighters if they would simply amend the Ali Act to incorporate MMA,” Couture said. “If Georges is able to pull this off, then it’s good for us as fighters. Maybe these contracts and this organization isn’t as ironclad as it seems to think it is.”