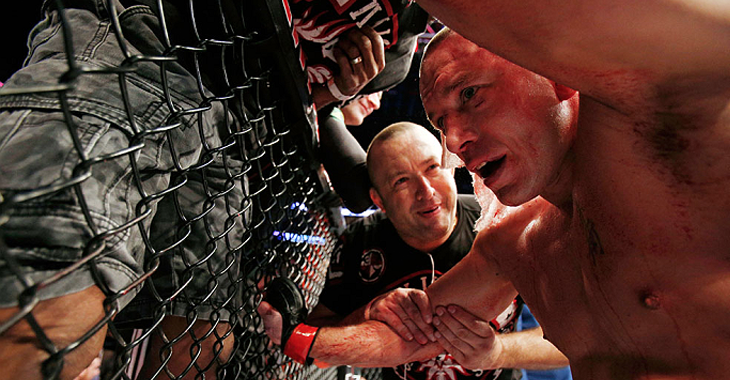 Weight-cutting is a controversial issue for many that plays a big part of combat sports such as mixed martial arts and boxing.

Recently, the touted UFC interim lightweight fight between Khabib Nurmagomedov and Tony Ferguson was canceled with Nurmagomedov being taken to the hospital the morning of weigh-ins suffering from weight management medical issues.

Are too many fighters taking it too far and pushing their bodies to an unhealthy level to gain a size advantage over their opponents?

UFC commentator Joe Rogan has often stated his opinion on cutting weight and former UFC welterweight champion Georges St-Pierre spoke on the UFC Unfiltered podcast recently talking about his own concerns on the matter.

“I’m not a big fan of cutting weight. I always prioritize my health over my performance,” St-Pierre said on the podcast (transcribed by MMA Weekly).

While there has yet to be a death from a fighter dehydrating themselves to make weight in the UFC, there have been unfortunate incidents in other mixed martial arts promotions. St-Pierre believes that unless the weigh-in system is changed, it will only be a matter of time before it happens in the UFC.

“I think they have to change it because one day someone will die. One day someone will die and it will affect all of us. It’s very bad for your health,” he said. “There is a certain percentage of hydration in your body that is critical, that you can actually die if you’re past that point. It is very dangerous.”

What are your thoughts on what Georges St-Pierre had to say about weight-cutting in mixed martial arts? What do you think could be done to make it safer for the fighters? Let’s hear it in the comment section.