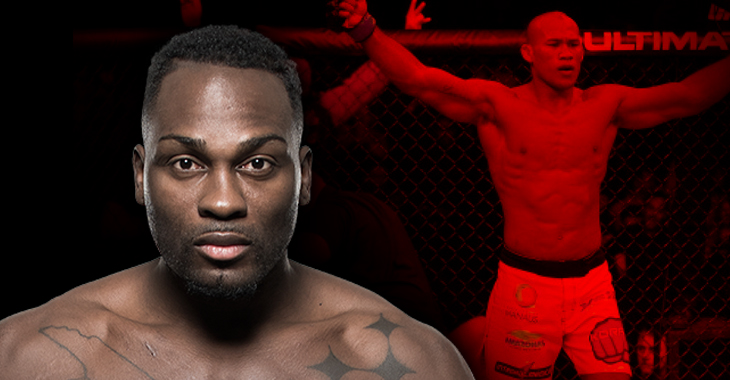 There have been mixed reactions to the recent news of Georges St-Pierre leaving middleweight and vacating the title he just won a month ago. It was his battle with his stomach in the arduous rode to weight gain that resulted in ulcerative colitis, prompting St-Pierre to abandon the division. Ignoring the negativity, we’ll focus directly on the positive. Eighth-ranked Derek Brunson has his eyes set on a springboard right at the top of the middleweight rankings with a win over Ronaldo “Jacare” Souza.

GSP vacates. That’s a real martial artist. Way to not stall the division. Best of luck bro! A win over #3 Jacare puts me next in line for the title shot 👊

Of course Derek Brunson is overjoyed. He’s slated to face Jacare on January 27th, 2018 at Spectrum Center in Charlotte, North Carolina. If he wins this rematch from 2012 in Strikeforce then he’s rocketed himself right near title shot contention. Brunson is one of the people looking at the bright side of the Georges St-Pierre news. After suffering through a long division limbo at middleweight, suddenly it has been restored and is about to experience a ton of movement with Luke Rockhold fighting Robert Whittaker for the undisputed middleweight title and Michael Bisping on his way out of the sport.

Jacare was actually nearly on his way out of the UFC, before renegotiating his contract directly before his fight with Whittaker. All of the top-ranked fighters of the division — including Luke Rockhold, Yoel Romero, and former UFC fighter Gegard Mousasi — were ready to go on strike. Now, Rockhold will fight to take back the title Bisping took fro him in the first place and it’s as if someone invented some sort of UFC middleweight division time machine.