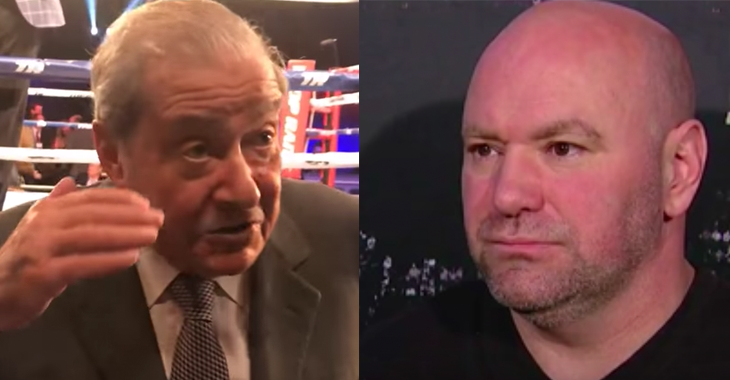 Dana White wants to launch ZUFFA Boxing and suddenly he’s at war with SHOWTIME and other promoters. He went on a tirade the other day on what he beleived were false SHOWTIME numbers regarding the historic Conor McGregor and Floyd Mayweather boxing bout. Since then, SHOWTIME executive Stephen Espinoza, who he worked together with to promote the fight, clapped back at his claims. Now Bob Arum has add fuel to the flames in his own, level-headed and precise way. Dana White wanted to talk numbers, so he’s talking numbers.

“A lot of what [Dana White] says is inconsistencies but I don’t want to take it apart piece by piece. What’s really happening is the UFC is cratering. You look at the ratings they’re getting and you look at their pay-per-view business, which is way down. Why? Because they don’t have the marquee stars that they had before. Because the UFC model is to keep the money for itself and not pay the fighters the way people in boxing pay the fighters, which is a major part of the revenue. So really, he has a real problem getting a deal that will justify the $4.5 billion price that they sold UFC for and neither FOX or anyone else will come close to that price.”

.@trboxing CEO @BobArum responds to Dana White & says the #UFC is “cratering,” pointing to struggling TV ratings and PPV numbers & says that the myth, that Dana sometimes repeats, that the UFC caters to a younger crowd than #boxing does is simply false. https://t.co/HnbGQEOseR pic.twitter.com/ng48AcDCJ9

“You see, a lot of business is built on myths. You’ve heard the myths for years and in fact he repeats it, that UFC caters to a much younger audience than boxing. We looked at the numbers and when fights were on HBO and SHOWTIME, he was correct. That the audience skewed old, but that wasn’t because the sport, it was because young people couldn’t afford the monthly fee required for HBO and SHOWTIME. When we went to ESPN where their wasn’t a monthly fee, we were blown away. We were up against [the UFC]. Not only did we do many more people, but in the age demographic 18-35 and then 18-49, we did two-and-a-half times the number that they did on their programming. […] Once we were free television on ESPN against their free television on FOX and FS1, it was no contest.” — Bob Arum speaking to SiriusXM Boxing.

Perhaps the most interesting thing that Arum said, is that Dana White knows what he is saying is myth and knows the numbers himself. Which is one of the reasons he’s wanting to get into promoting boxing in the first place. It seems that along with all of the MMA fighters who are seeking a larger piece of the pie in boxing, that Dana White is looking to do the same. But will a ZUFFA Boxing card perform as well as some of the ones featured on ESPN? Not only that, but would Dana White even put it on free television? As we hear more and more about ZUFFA Boxing, there are a lot of questions that will need to be answered.