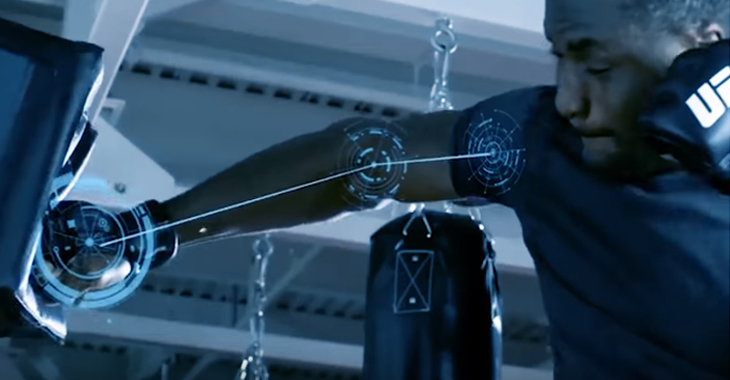 We all knew Francis Ngannou hits hard, just ask the four opponents he’s stopped in the UFC with his thundering strikes. As if this needed anymore testing, the folks at UFC took Ngannou to undergo some sophisticated testing that looks like the kind of stuff Ivan Drago was doing in that Rocky IV movie. Remember when he punched those electronically-rigged pads and the numbers skyrocketed? Yeah, that happened in real life and it turns out that Ngannou supposedly the hardest-punching dude in the world, or at least the hardest so far to punch on this machine.

“The hardest I’ve ever been hit in the gym — what’s that beast’s name from France? [Francis Ngannou] came and trained with us and the first day we trained together — I think I was getting ready for [Daniel Cormier]. We were sparring and I hit him one time and I thought I was out of the way. Hey, that buddy can hit. I respected him before, I respected him more after the hit. He hit me square in my nose, I’m glad it didn’t break, but he really did hit me hard. That’s when I was like, ok, if this guy is hitting me hard and I’m saying, ‘Wow’, then everybody else in the heavyweight division — they have four-ounce gloves on—and they’re getting hit with those. He’s crackin’ people.” — Anthony ‘Rumble’ Johnson speaking to media about Francis Ngannou.

For comparison, former muay thai and GLORY champion Tyrone Sprong punched-in at 114,000 units. Francis Ngannou? He blasted it out of the park quite literally with 129,161 units. You know what Bruce Lee says though: Boards don’t hit back and Alistair Overeem will most definitely hit back. The biggest fight of Francis Ngannou’s career is very close on December 2nd and it has been hyped up by Dana White claiming Ngannou is the next big thing. If he manages to show off this punching power by dispatching a warrior like Overeem, then he lives up to all the hype.