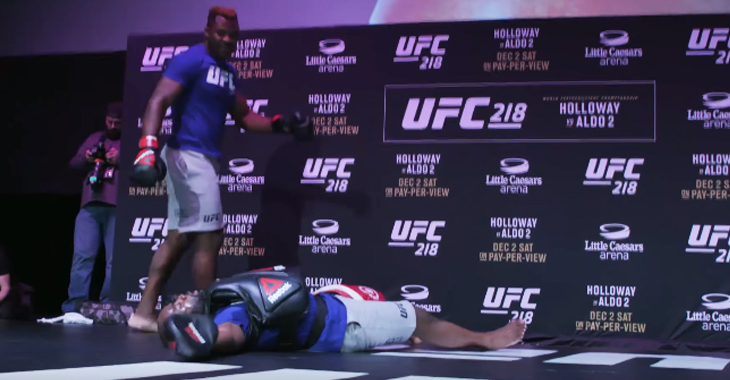 The hype surrounding heavyweight’s new beast Francis Ngannou couldn’t be greater. Dana White has labeled him the next big thing in MMA, literally and figuratively. Clearly, the UFC is putting a lot of stock in the young, surging contender. He pretty much as moved into the organization’s Performance Institute and was recently tested to prove he’s the hardest punching man on Earth, which resulted in Joe Rogan singing his praises on a recent podcast. If all that wasn’t enough, take the time to watch his UFC 219 open workout because it is downright hard to watch him inflict punishment on his head coach.

That man holding pads is Fernand Lopez of France’s MMA Factory. We don’t know how much money he makes, but it isn’t enough considering part of his job is to hold pads for Francis Ngannou. Is there a such thing as hazard pay for an MMA trainer? Even with the heavy pillow cushioning each blow, you can’t help but wince with every single leg kick he lands on Lopez. This man hits hard. Really, really hard. It’s even backed by science, however I’m sure the crew at his gym didn’t need any empirical evidence to prove that hypothesis.

Not to be overshadowed by the power is the speed, the combinations, and Ngannou’s elbow game. In one of his last fights, he submitted Anthony Hamilton with a Kimura he learned in the back, imagine all the skills he’s implementing with each fight camp. It’s clear he’s young with a lot of potential and he just keeps getting better as time goes by. The big question is though, just how good has Ngannou gotten and is it enough to beat Alistair Overeem? We’re only a couple of days away from having that question answered.

job i do not want: francis ngannou’s pad holder pic.twitter.com/H9qHsmE7UU