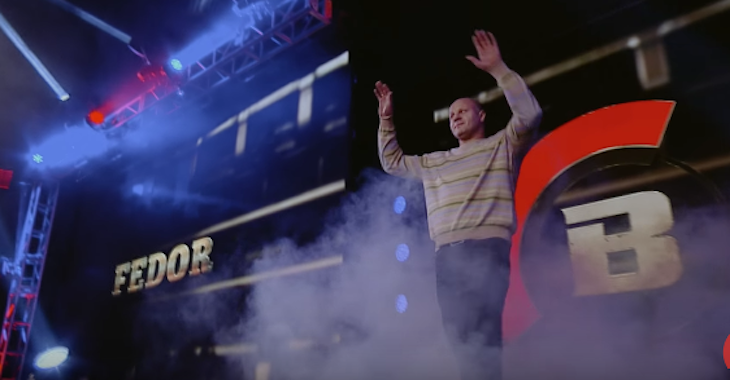 If things had gone according to plan, Russian MMA legend Fedor Emelianenko would have made his long awaited debut in the Bellator cage in the main event of Bellator 172 last night. Regrettably, fate got in the way, as his opponent Matt Mitrione was forced out of the fight with kidney stones just hours out from battle. Though Bellator initially made moves to find a replacement for Mitrione – with Chael Sonnen being the leading candidate – they ultimately failed to do so, and Fedor was removed from the card altogether.

This ugly twist, of course, was gutting for fans of Fedor and Mitrione alike. It’s also likely to have stung pretty badly for Bellator, who invested plenty of resources into promoting Fedor’s debut in their cage – perhaps most memorably, by creating a video that explores the origins of the Russian’s legendary striped sweater.

Yet in the wake of this cancelled Fedor-Mitrione fight, one bit of feel-good news has managed to emerge. According to Bellator MMA president Scott Coker, who addressed the media post-event, Bellator will be auctioning off Fedor’s beloved sweater and proceeds will go to a yet to be announced charity.

“We had hoped that this would be a different circumstance,” Coker said, mourning Bellator 172’s cancelled main event. “What Fedor has agreed to do is, he’s going to auction off the sweater, so we’re going to auction it off through the Bellator channels.”

At the moment, bidding on this revered piece of MMA memorabilia has not yet begun. When it does, however, we can probably expect the price to spike pretty quickly.

Will you be making a bid on Fedor Emelianenko’s legendary sweater? Will you be selling everything you own to make that offer? Sound off, PENN Nation!