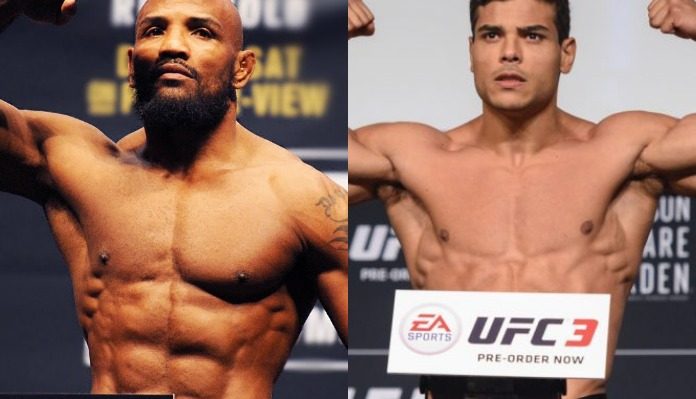 The UFC has stacked the deck for UFC 241, with the heavyweight title on the line and some very intriguing bouts on the main card. In one of those bouts, former middleweight title challenger Yoel Romero will take on Brazilian knockout artist Paulo Costa, who has been asking for this fight for a long time.

Heading into the scrap, Romero is a -155 favorite while Costa is a +125 underdog.

Ahead of the fight, BJPENN.com reached out to several pro fighters to get their predictions for the scrap. Although the odds are close, the pros believe it is a much easier fight for Romero.

Volkan Oezdemir, UFC light heavyweight: Romero for sure. He has been one of the best for a long time. I think the experience will play a big factor against Costa.

Ian Heinisch, UFC middleweight: Yoel Romero. I think he is going to stomp him and will beat him everywhere. Costa has some hard strikes but I don’t think his skills are up to Romero’s just yet.

Marvin Vettori, UFC middleweight: I think Romero wins this one. I have called out Costa before because I don’t think he is good and is overrated, so Romero.

Kennedy Nzechuwku, UFC light heavyweight: I think Romero takes it. It will be a good fight because Costa is no joke. I just think the experience will be too much for Costa.

Manny Bermudez, UFC bantamweight: My favorite fighter ever is Yoel Romero and I think the experience and wrestling will play a big factor in this one

Drakkar Klose, UFC lightweight: I think Romero gets it done. He is tough and is explosive and will get it done.

Christos Giagos, UFC lightweight: Yoel gets it done. He is a beast and he gets it done for sure.

Benito Lopez, UFC bantamweight: Damn, Yoel is still fighting after making that bank haha. I think Yoel wins it though, he is experienced and is more battle-tested. He has the more well-rounded skillset.

Trevin Giles, UFC middleweight: I think Romero gets it done. His experience will be a huge bonus for him in this fight. But, both of them are really good. Romero will dictate where the fight goes as he will use his wrestling to get the win.

Leonard Garcia, BKFC fighter: Yoel Romero is always unpredictable. But, I think he gets it done based on his explosiveness and experience. Costa has never dealt with anyone like Yoel.

Who do you think will win the fight between Yoel Romero and Paulo Costa at UFC 241? Let us know in the comment section.