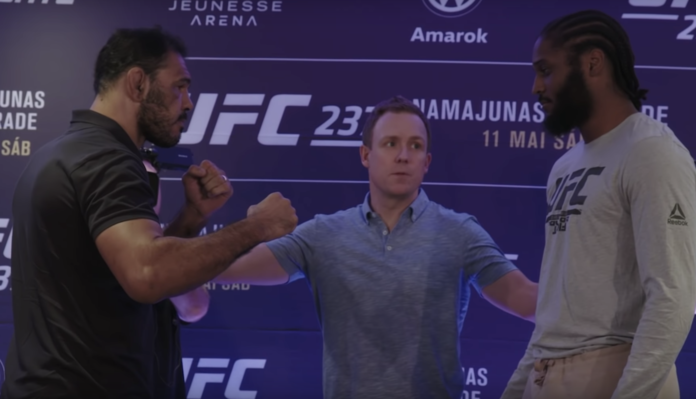 Ryan Spann is heading into enemy territory to take on Brazilian MMA legend Antonio Rogerio Nogueira, aka “Lil Nog,” this Saturday at UFC 237.

Spann won his UFC debut by unanimous decision against Luis Henrique Barbosa de Oliveira. Following the fight, the Fortis MMA product wanted to fight “Lil Nog” and asked for the fight — something not many people do. The reason he wanted the fight is simple.

“I wanted it. We asked for it, I had asked for it a couple of times actually,” Spann said to BJPENN.com. “Maybe just the opportunity, I’m not sure. It was just something we talked about so we asked for it. I know he is a legend and has fought some big names. He’s just a name and I want that on my record.”

Nogueira has beaten the likes of Tito Ortiz, Rashad Evans, Dan Henderson and Alistair Overeem among others in his career. Although he is 42-years-old, Spann still knows he is dangerous and holds knockout power. However, the American is more than confident in his ability to win the fight no matter where the action takes place.

“I feel like I can win anywhere. It doesn’t matter. But, we have a couple of different game plans. I can knock him out, I can submit him,” Spann explained. “It really doesn’t matter, I just want to win. To me, I just have been doing it all my life so I just do it. But, I guess being prepared for anything is a confidence booster. It doesn’t matter where the fight goes, I know will it be fine.”

Something that may be difficult for Spann is the fact he is going to Brazil and taking on one of Brazil’s own. He expects some boos and chants, but isn’t too worried about that. He says the biggest drawback of fighting in enemy territory is the trip itself.

Ultimately, the 27-year-old is more than confident in his abilities to win the fight and have the name Nogueira on his list of victims. He understands what that can do for his career and knows he has to get his hand raised at the end of it.

“Hopefully, it gives me the boost, the name recognition to get another big fight. Kind of get me a step closer to get big money,” he stated. “Taking him out hopefully speeds up the process.”

In the end, after a tough training camp at Fortis MMA, Spann is ready for the biggest fight of his career and wants it to be over quick.

“Perfect world, I finish him in the first round. But, it doesn’t matter, I’m coming to get my show and win money cheques. When push comes to shove, just win,” he concluded.