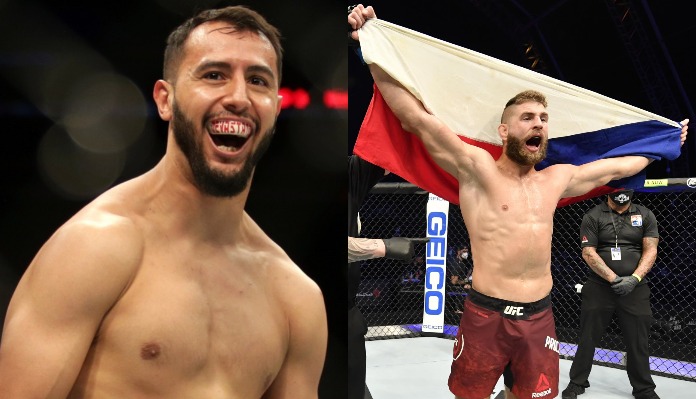 In the main event of UFC Vegas 25 on May 1, Dominick Reyes is looking to snap his two-fight losing streak as he battles Jiri Prochazka. Entering the fight, Reyes is a +110 underdog while the former RIZIN champ is a -130 favorite.

Ahead of the fight, BJPENN.com reached out to several pro fighters to get their predictions for the scrap. The pros are split on this one but the slight majority lean towards Prochazka picking up his second UFC win.

Devin Clark, UFC light heavyweight: I think it will be a pretty good fight but I have to go with Dominick Reyes. I think he can drag this fight out and have success in those final three rounds and likely get a finish then.

Tristan Connelly, UFC featherweight: I will go with Prochazka. He looked good in his debut.

Cody Stamann, UFC bantamweight: Man, that is a close one. I really like Jiri Prochazka and he’s tough and has KO power. He’s not scared to get into a firefight and I think he can land something big and KO Reyes.

Joe Solecki, UFC lightweight: I think Reyes. He had the hiccup with Blachowicz but I still think he’s one of the best and will be able to piece up Prochazka.

Diego Ferreira, UFC lightweight: I go with Dominick. I think Reyes overlooked Jan and he will be a much-improved fighter here. Prochazka gets hit a lot and I think Reyes is hungry and will sharpen up his boxing and win the fight.

Dustin Jacoby, UFC light heavyweight: I like Jiri Prochazka a lot as he likes getting into these technical brawls. I think he has more power than Reyes and Reyes gets hit a lot. Jiri by KO.

Jeff Molina, UFC flyweight: It’s tough as I wonder how Reyes will look after the Blachowicz loss. I think he overlooked Jan way too much but he took the right amount of time off. Jiri is good though man and I think he lands something big early and finishes it in the first or second.

Who do you think wins the UFC Vegas 25 main event between Dominick Reyes and Jiri Prochazka?