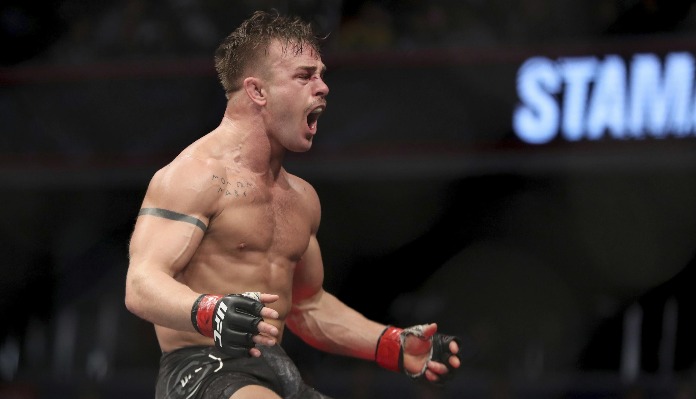 “Absolutely. I was considering going a different route because I’ve been training for the same guy for so long. After four months of training for the guy I was ready for something different. But, his name kept coming up,” Stamann said to BJPENN.com. “Then, he started showing up at the gym that I train at. He then starts training with all my training partners, which is weird. But, all my training partners after training with him were telling me I need to take this fight because I’m a bad style matchup for him. They told me I’m a better wrestler than him and can outstrike him, and that was the deciding factor as to why I decided to accept it again. I had some double agents running it around and they told me it was a good fight for me.”

Entering the fight, however, Stamann is a sizeable underdog as he’s more than a 2-to-1 underdog. For Stamann, he says he still doesn’t know why he’s an underdog.

He knows Dvalishvili is a good wrestler, but Stamann believes he’s a better wrestler and will be able to outstrike the Georgian.

“I mean, that is the story of my fighting career. I’m big underdogs against guys who I shouldn’t be,” Stamann said. “I have been looking at who he’s fought and who I’ve fought and the skill sets we have and it doesn’t make sense to me. Sure, Merab can wrestle, but I’m also a high-level wrestle who has only be taken down a handful of times in my entire career. Do people really believe Merab will get 10 takedowns on me? I don’t see it.

“He fought a 40-year-old John Dodson to a close fight. He then beat a guy on 40 hours notice like I don’t get it,” Cody Stamann continued. “Then, I’ve seen him on his feet in the gym and this guy is an amateur on the feet, he just throws hard. I’ve been fighting wrestlers my entire career. Something about being the underdog irritates the f**k out of me. I know there is so much more to prove because I don’t have a lot of hype a lot of these guys do.”

Not only does Cody Stamann expect to be able to stuff Merab Dvalishvili’s takedowns, but he says he will be the one initiating the wrestling. Once he makes Dvalishvili start worrying about his takedowns, he will then go up top. He is confident he will be able to land some big shots and eventually put him out.

“I’m going to wrestle him. The thing is, I’ve watched so many guys try to beat around the outside against Merab because they are scared of the takedown. I’m a better offensive wrestler than Merab and defensively, I’m one of the best,” Stamann explained. “Merab will probably be the most tenacious fighter that I’ve fought. But, I’m a sharp striker and I can counter punch anybody. As much as I think I can get ahold of his neck, it’s his striking defense. I’ve watched him in the gym and he trips over his own feet. His striking is not good like it might be the worse out of anyone I’ve fought in the UFC. It’s really, really awful. I’m going to crack this dude and I’m going to put him to sleep. The big Merab fans will be confused when the fight is over.”

If Cody Stamann does KO Dvalishvili, he says the goal is to hold out until he gets a top-10 opponent or a big name. He also sets his sights on Frankie Edgar and Jose Aldo.

“I can’t figure out why I’m not in the top-10 anymore. Once I beat Merab, I want a big name. I want a guy like Frankie Edgar or Jose Aldo next. I’m here to show everyone my level and how good I am,” Stamann concluded.

Do you think Cody Stamann will beat Merab Dvalishvili?