Jeff Molina promised he would put on a show at UFC 261 and he did just that.

Molina made his UFC debut against Aoriqileng in the second fight of the night. In the lead-up to the scrap, the Contender Series winner thought he would be able to finish Aoriqileng. The game plan was to use leg kicks to eventually get his hands down and land something up top. Yet, Molina knew after the first round he had to make some big adjustments.

“This guy likes to march people down and the game plan was to chop his lead leg down early and often and then go up high,” Molina said to BJPENN.com. “That was the biggest thing in the fight that wasn’t working for me and we had to adjust after the first round. We also wanted him to respect the power and I did a good job on that in the second and third round.”

After the first round and getting some advice from his head coach, James Krause, Molina changed his game plan. He knew he would outstrike Aoriqileng and even dropped him twice.

In the final 10 seconds, Molina pointed to the ground and got in a slugfest, and ended up getting rocked. For the 23-year-old, he says he was rocked for quite some time and won’t do that again. However, he believes that is what he secured him the Fight of the Night bonus so he says it was worth it. 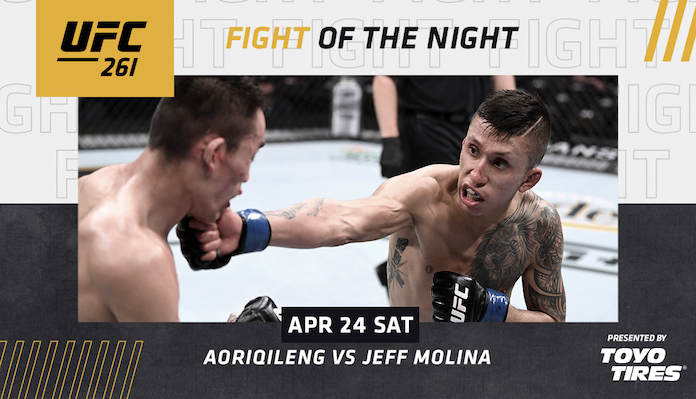 “There are a lot of what if’s in MMA. Like if there were 10 more seconds in the second round, I believe I would’ve finished him, but the same could be said about the third round for him. I was f****d up, man,” Molina explained. “I was hurt for sure. Funny enough, I pictured that same scenario in my head where I hear the 10-second clapper and point to the ground like Max Holloway and I swing. When you bite your mouthpiece, put your head down you put the odds at 50-50 and the odds of me winning at that point was like 90 percent. I don’t know if I was trying to be entertaining or wanting the $50k, but I got hurt because of it. Honestly, I was hurt for like 10 minutes after the fight and came to it backstage.

“Here’s the thing though, that final exchange might have secured me the $50k,” Molina continued. “On one hand, is the 50k worth the brain damage? Yeah, maybe but I want longevity in this sport. I also got 15 minutes of cage time and 50 g’s richer so I can’t be too mad about it.”

After the win, Molina said he was going to call someone out by Jimmy Flick retired. Now, the goal is to return in the summer against whoever the UFC and James Krause want him to.

“I wanted the winner of Jimmy Flick and the great value Figueiredo, but Flick retired. Figueiredo got rebooked against Malcolm Gordon in July, so maybe the winner of that. But, it really is whoever, if James Krause likes it, I like it. I do want to fight again soon, maybe late July or early August,” Molina concluded.

Who would you like to see Jeff Molina fight next?