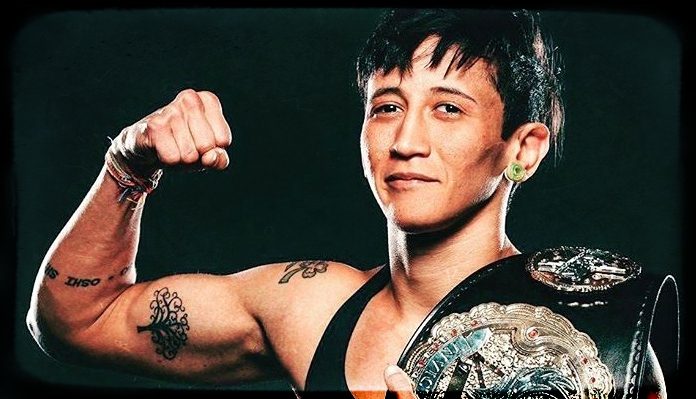 In every sport around the world, there are humans that will perform day in and day out to the best of their athletic capabilities.

Of all the incredibly talented individuals, some will be more recognizable than others, but that doesn’t mean they’ll all be as equally impressive as the next just because they’re more well known.

In the mixed martial arts world, one of the breeding grounds for the sports’ historically very best fighters and champions has been the great and proud nation of Brazil.

Despite there not being as many champions in 2019 as there once was in earlier years, the ones that are currently on top are still in the process of paving some great legacies of their own. And if you are unaware of them now, you might not be for long.

One of those champions happens to be Serrinha, Bahia’s own Virna ‘Carcara’ Jandiroba.

For the 30-year old Jandiroba, she became the Invicta FC champion just this past year with her dominant decision victory over Mizuki Inoue at Invicta FC 28.

Incredibly humble yet entirely confident in her abilities, Jandiroba is a 14-0 undefeated Brazilian Jiu-Jitsu black belt.

While it takes a lot of focusing on one’s self to reach and ascend to their championship level goals, inspirations can still be drawn from others. As is the case with Jandiroba who has two names that resonate with her when thinking of who has inspired her along her journey.

“I think Muhammad Ali is so awesome,” Jandiroba shared with BJPenn.com. “I love how he was so confident, and mainly for leaving a legacy beyond his fights, he was so politically engaged and that fascinates me. I started my career in MMA comparing myself with Demian Maia. His style of fighting and that Samurai respect he has, I just love it!”

A BJJ master like Demian Maia is a lofty comparison to live up to, but for Jandiroba, ‘so far so good’ would be an understatement.

At strawweight, submission grappling doesn’t get much better than what we see from the Invicta champion when she competes. Exactly how good is Jandiroba’s grappling? Well, let’s put some things into perspective.

Of Jandiroba’s 14 wins, 11 of them have come via submission. Those of which have varied with the likes of rear-naked chokes, triangle chokes, arm triangles, and armbars. When Jandiroba gets an opponent down, it’s generally game over or you’re stuck until the round is over.

11 also happens to be the same number that current UFC champion Rose Namajunas has in total fights.

But if watching her perform and knowing that isn’t enough, the Brazilian also holds wins over a perennial top contender in her division, Claudia Gadelha, as well as the current UFC bantamweight and featherweight champion Amanda Nunes both in BJJ competition.

Although fighters who are undefeated are that for a reason, sometimes there can be some negatives or bigger obstacles that fighters with losses don’t have to deal with.

One of the most common sayings in the sport is that you win more from losses than you do with wins. So without any losses, Jandiroba’s amazing humility has helped her learn without them.

“I believe when you lose a fight you [do] learn a lot,” Jandiroba said. “You learn through pain or through love, I prefer learning through my positive experiences and through other people’s experiences. Even when I win a fight I always think, ‘I have to fight better next time,’

“I know I have a lot to learn and develop on as a fighter. I think I’m a dangerous one, but I think there’s a lot of dangerous fighters out there and If I don’t practice they will get me. No one is unbeatable, neither am I!”

For undefeated fighters, let alone champions, another mental hurdle to overcome can be that of the extra pressure that comes with both labels.

As the best or the seemingly unbeatable, often times the world is expecting certain outcomes. Those of which are more often than not stellar performances.

Because of this, simplifying every situation is what takes the edge off for Invicta’s strawweight queen.

“There is some pressure,” Jandiroba said. “But I don’t let this feeling take [over] me when I’m inside the cage. When we are locked up in there, there’s only two fighters willing to win, that’s it.”

With all the extra yet unthought of challenges that can come with being an undefeated champion, there’s also the issues that can present themselves for fighters who are also finishers… Like Virna Jandiroba.

The big question mark that can come up here is, ‘can they fight in long fights and get through adversity?’

For Jandiroba, her first career title fight came against Mizuki Inoue, thus making it the first five-round fight of her career. Having gone the distance against an opponent who came in on just a few weeks notice, Jandiroba was able to silence any other doubts that the critics may have had.

“I learned so much in my fight with Mizuki,” Jandiroba explained. “That was a five round fight and I could test myself and learn a lot about myself. But in every single fight, I’m thinking to myself, ‘I can do better,'”

Initially, the Brazilian was to be facing off with her fellow countrywoman Janaisa Morandin rather than Inoue for the title. That fight, however, would be re-made for Jandiroba’s first title defense which took place at Invicta FC 31 in September 2018.

It would be a vintage performance for the champion as she utilized her sneaky sharp striking to lull Morandin into thinking she would stand with her. Therefore leading to Jandiroba hitting her takedowns and dominating Morandin on the ground before wrapping up the second-round arm triangle to force the tap.

The win just continued to show that Jandiroba is one of the very best strawweights in the world and levels above her competition thus far. And with every showing, the ultimate proving ground is taking notice.

“I would fight on a monthly basis if that would be possible, I love the feeling of being inside the cage!” Jandiroba stated. “There’s always a conversation with the UFC after my fights, but at the moment we don’t have a perspective of signing a contract, they know that I’m at least top 10 in the organization.

“What I’m expecting next is to be fighting under the Invicta FC banner and defending my belt, again and again… [Danielle] Taylor just won her last fight and challenged me in her post-fight interview, I think it’s a good fight to make!”

It’s just a matter of time for Virna Jandiroba before she finds herself in the UFC. Her willingness to fight at any given moment accompanied by her talents is something that can never be seen as a hindrance.

However, things can end up getting tricky at the top of the mountain.

The UFC’s strawweight division is currently looking better than ever, and at the top sitting in the current throne is the previously mentioned Namajunas. But that might not be the case for much longer as Jandiroba’s good friend Jessica Andrade looks to make Namajunas’ gold her own in May.

Now that the UFC has a flyweight division, could we eventually see a similar situation as we did with Cain Velasquez and Daniel Cormier at heavyweight and light heavyweight?

“Jessica [Andrade] is my friend,” Jandiroba said. “We trained together for her camp in the fight against Claudia Gadelha and we met later in her last fight in Dallas after my fight with Janaisa Morandin. We are good friends and we share the same manager

Of course, it’s a good problem to have when it means both are the queens of the hill. And Jandiroba understands that they have helped each other plenty on their paths to getting there.

“I love training with her,” Jandiroba continued. “I have learned a lot and I can compare our levels. Besides that, we always have so much fun when we are together.”

Challenges are something that every individual strives for. Something that can be overcome to continue proving that the hard work has paid off. And for a champion, there is no challenger that Jandiroba would say no to.

When asked whether or not she would be interested in fighting the strawweight champion in one of these bouts, Invicta atomweight champion Jinh Yu Frey said that she wouldn’t be opposed to it.

And in classic Jandiroba fashion, she wasn’t opposed to the idea either.

“I don’t think she is too small for the division,” Jandiroba said of Frey. “Maybe if she has a proper training [camp] and preparation she could fit well in the strawweight division.”

“I would love to fight Joanna [Jedrzejczyk]!” Jandiroba said. “She has the best anti-grappling game that I’ve seen. The girls can’t find a way to keep her on the ground! She would be the hardest test for me.”

The former strawweight ruler Joanna Jedrzejczyk is definitely a very intriguing matchup for the BJJ wizard. And despite being taken down in 7 of her 11 bouts at strawweight, it has been nearly impossible to keep Jedrzejczyk down.

Wanting to prove that she could be the one to do it isn’t surprising coming from Carcara. And in more ways than one, Virna Jandiroba is definitely living up to her nickname.

“Carcara is a bird of prey commonly known from the place that I was born.” Jandiroba shared when speaking of her nickname. “I wanted something that represented my place of Northeast Brazil and the carcara represents not only the place but also the personality that I have tried to build in my fights. It’s an imposing and brave bird, which survives even in the baddest times.”