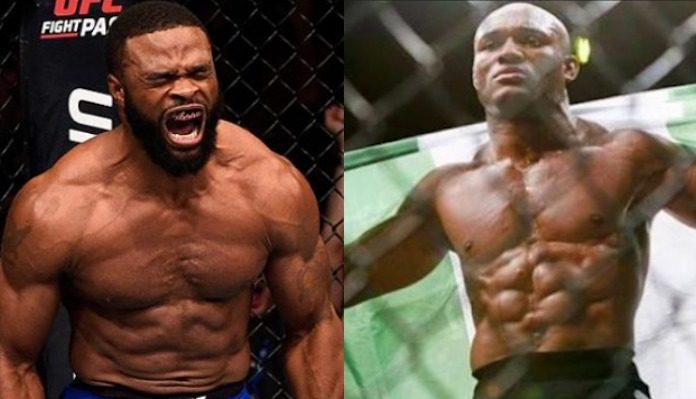 In the co-main event of UFC 235 this Saturday, Tyron Woodley will look to defend his welterweight title against Kamaru Usman.

Ahead of the fight, BJPENN.com reached out to several pro fighters to get their predictions for the title fight. In this case, the majority are leaning toward one fighter.

Diego Ferreira, UFC lightweight: I like Woodley. He is a really good standup fighter and good at wrestling. Usman talks too much but he is a good guy coming up but Woodley will win.

Jared Gooden, Titan FC welterweight: I can’t stand either one of them. I think Usman though, I just can’t stand Woodley.

Louis Smolka, UFC bantamweight: Woodley. He will go out there and smash him. Usman is a grinder where Woodley is explosive and I just don’t see Usman being able to deal with Woodley’s athleticism. Like Woodley said it himself, he does what Usman does, but better.

Jason Knight, BKFC featherweight:  A lot of people are not going to believe this because I tweeted something about Tyron Woodley’s garbage ass music. I am a huge Woodley fan. I believe he will beat Usman. Whenever Woodley fights like he can, he is an exciting fighter. I’m a big fan of his but that music… he has to give that up.

Renato Moicano, UFC featherweight: This is another tough fight to call. I think Woodley is a better wrestler and has more power, so Woodley will win.

Miles Johns, LFA bantamweight champion: I got Woodley winning. Stylistically, they are pretty similar but Woodley does what Usman does better.

Jose Torres, Brave CF flyweight: Tyron Woodley. It’s crazy because I know both of them very well. When I look at their styles, I don’t see much of a chance for Kamaru Usman. I think he is a phenomenal athlete but Woodley is that much better. He has the wrestling, the striking, and Usman doesn’t have that.

Stay tuned tomorrow to see who the pro fighters pick for Jon Jones vs Anthony Smith.