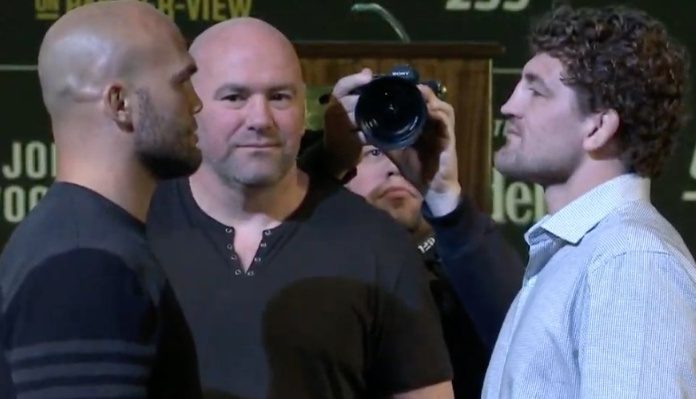 UFC 235 is set to go down on Saturday at the T-Mobile Arena, in Las Vegas, Nevada. The card is already in the lead for Card of the Year as it is absolutely stacked. On the card, and making his UFC debut, is former ONE and Bellator champ Ben Askren, who is taking on former UFC champion Robbie Lawler.

Ahead of this fight, BJPENN.com reached out to several fighters to get their predictions for the fight.

Some believe Askren will be able to maul Lawler on the mat, while others think Askren could be in over his head.

Diego Ferreira, UFC lightweight: I really don’t know much about Askren, but I am going to go with Robbie Lawler. I think it will be a good fight but Lawler will win.

Renato Moicano, UFC featherweight: It is a very hard fight to call. Lawler is a monster, a killer. People say Askren is the best wrestler in MMA. But, I think Lawler will win.

Hannah Cifers, UFC strawweight: I’m going to go with Lawler, I’m a fan of his.

Louis Smolka, UFC bantamweight: Probably Ben. As much as I love Robbie he hasn’t looked like himself since he lost the belt. Maybe he comes out and gets it done but I think Askren gets it done.

Jared Gooden, Titan FC welterweight: I have to go with Lawler. He has been through some wars but Askren bores me. All he does is go out there and wrestle. He doesn’t have any striking, all he has is wrestling. I think Lawler catches him and puts him to sleep.

Miles Johns, LFA bantamweight champion: I have Ben Askren winning. Maybe that is just because I’m a wrestler but that guy is dangerous. When he gets his hands on you, I don’t think you get up. Lawler is super tough but I don’t think he will be able to keep him off of him.

Cody Stamann, UFC bantamweight: I think Robbie is going to clean him up.

Jason Knight, BKFC featherweight: I sure hate it for my boy Robbie Lawler, but Askren is going to take him down and beat him the f**k up. I just see Askren coming to beat the entire division up.

Jose Torres, Brave CF flyweight: The Askren vs. Lawler fight is really a crazy one. We already know Lawler is a brawler and wants to go, go. Plus, he has good wrestling defence, but no one has the pedigree of Ben Askren. I think Askren will be able to do what he usually does, but will take a couple more shots than he normally does. If he is able to get Lawler on the ground he will tire him out and get the win. I think Askren will win by decision.

Stay tuned tomorrow and Thursday for fighters pick Usman vs Woodley and Jones vs Smith.