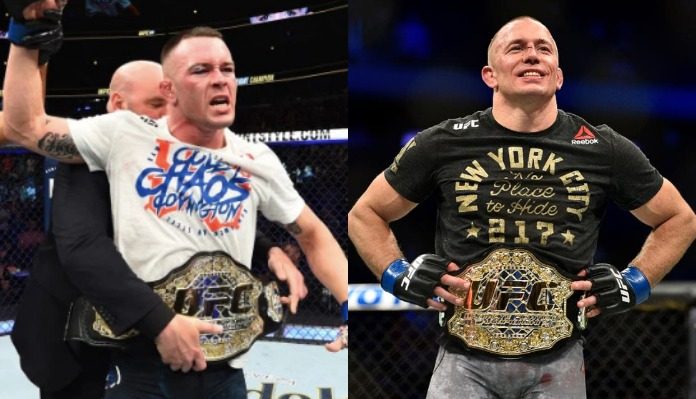 Despite the fact that he recently captured the UFC interim welterweight title, Colby Covington will not get the next crack at undisputed welterweight champ Tyron Woodley. Instead, that opportunity will go to Darren Till. The pair meet at UFC 228 on September 8.

While Covington is keen to fight the Woodley-Till winner as soon as possible, he’d also be interested in taking another fight in the meantime — such as a showdown with former UFC welterweight and middleweight champion Georges St-Pierre, who has recently been linked to a potential return at UFC 231 in Toronto in December.

“I know GSP is looking for a dance partner in Toronto,” Covington said on the latest episode BJPENN.COM Radio. “He claims to be the greatest welterweight of all time, but we all know that’s just claims. He doesn’t even wanna fight at welterweight anymore. He’s a little fucking bitch. He’s fucking trying to fight lightweights, and he’s doing anything he can to avoid the welterweight division, ’cause he knows I’m here now. He knows I’m the welterweight champ.

“He knows I’m the true welterweight greatest of all time, so we’ll see what happens, how things play it out,” Covington added. “You just never know.”

“Nick Diaz, that little woman-beater wannabe thug,” he said. “You never know if he’s gonna wanna fight on the same card of his little brother, and watch his little brother get his ass whooped by my teammate Dustin Poirier. So you just never know what happens in the meantime, but I’m 100% next [for the title fight].”

Who do you want to see Colby Covington fight next?