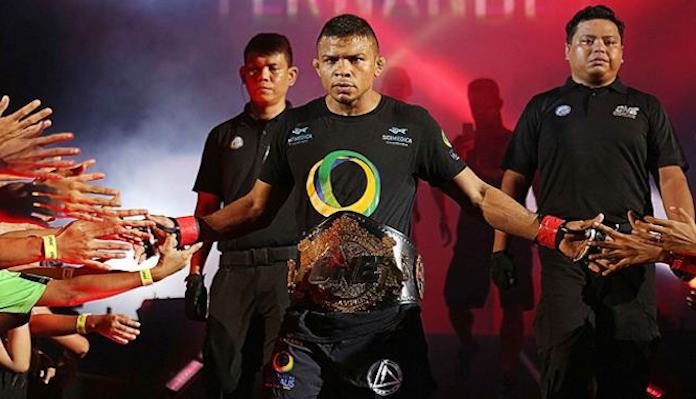 With that said, it is unlikely fight fans will ever see “The Flash” and “Mighty Mouse” throw down inside the ONE Championship cage.

The idea of Demetrious Johnson fighting under the ONE Championship banner seemed highly unlikely just a few days ago. However, that all changed when ESPN reported that the UFC was close to finalizing a deal where they would obtain the rights to Ben Askren in exchange for sending “DJ” to the surging Asian promotion.

Fernandes, who is scheduled to rematch current interim champion Kevin Belingon in a title unification bout at ONE: Heart of the Lion on November 9, recently spoke with BJ PENN RADIO.

During his interview with host Kinch, the Brazilian revealed that he is very confident his good friend Demetrious Johnson will soon join the ONE Championship roster.

Bibiano went on to discuss why his longtime training partner, “DJ”, may have wanted to leave the UFC.

“The answer is very simple if you think about it because Demetrious Johnson is a Mixed Martial Artist. If you watch the way he presents himself, the way he talks, you can see he is a real Mixed Martial Arts guy. He doesn’t trash talk with guys and maybe he didn’t get the promotion there because he didn’t trash talk. He’s a very simple man and he likes to compete. But what he did in the UFC, I don’t think anybody could do it, I don’t think anybody could break his record there. 11 times. For me Demetrious Johnson is the best pound for pound, for sure. He lost his last fight and he was coming off an injury, but he’s tough, he’s good. When we talk about mixed martial arts, MMA is a different game, you know what I mean?”

When Fernandes takes to the cage November 9 in Singapore for his rematch with Kevin Belingon, who he previously defeated via first-round stoppage, he will be doing so with Demetrious Johnson in his corner.

“He’s going to be in my corner for this fight. He will be there in Singapore on November 9th and be in my corner. I think it will be good for him to come see what’s going on there.”

If Demetrious Johnson is traded from the UFC to ONE Championship for Ben Askren, who would you like to see “Mighty Mouse” fight first on Asian soil? Sound off in the comments section PENN Nation!

The full interview will air on BJ PENN RADIO soon.