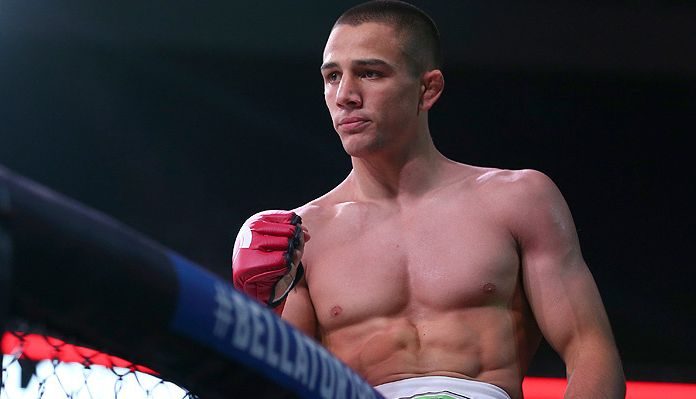 Pico grew up around fighting, he was a wrestler growing up and became one of the best in America. He would go onto win the Cadet World Championship in 2013. He followed that by coming second and third in 2014 and 2015 at the Junior World Championship for wrestling.

Not only was Pico a dominant wrestler, but he was also a phenomenal boxer. He won the PAL championship in 2008 and in 2009 won the Junior Golden Gloves championship. With a boxing and wrestling background, Pico was destined to be a star in MMA, and a star he is.

In 2014, Pico signed a huge contract with Bellator MMA to become their blue-chip prospect and hopefully next star.

“I think sitting down with the Bellator team and Scott and my management team as well, it was a good fit, it was a good fit. We saw Bellator’s vision and their energy towards growing,” said Pico in a recent phone interview to BJPENN.com about why he signed in Bellator. “It is a big challenge from an early age, so far so good. We are doing great things, Bellator is growing as an organization and I’m fighting on big cards on television. I knew coming in that I was going to put on the big stage on live TV. It is a great fit for me.”

Although Pico signed in 2014, he would not make his long-anticipated Bellator debut until June of 2017. Pico was set to take on Zach Freeman in Bellator’s first time at Madison Square Garden. Pico was defeated in the very first round, and following the fight, the prospect made a huge decision.

“I just was a little too small and my body early on in my career, 155 is just not, I feel better at 145 that’s for sure. My strength and condition coaching and my nutritionist it was just a challenge to keep that weight on at 155,” added Pico of why he decided to move down to featherweight. “My body and my frame just isn’t made for 155 and I think 145 is perfect for me right now, and I make it no problem. There is no way I am a 155-pounder. I wanted to get down to 145 and see how I feel and I feel great.”

While Pico feels better at featherweight, he was also performing better and won three fights in a row, all by TKO or KO in the first round. Part of the reason why Pico was having so much success is the way he trains, as the 21-year-old is training with UFC bantamweight champion T.J. Dillashaw, UFC featherweight Cub Swanson and coach Duane Ludwig among others.

“It has helped me a lot. Growing up I always surrounded myself with high-level guys from all across the world. I train with the best and surrounded by high-level guys brings out the best in you and in them,” the prospect added of how training with Dillashaw and Ludwig has helped him improve. “When you start competing with each other overall it just makes you a better athlete and prepares you for these moments.”

While the first fight of his pro career was a tough one, Pico knew he had to look past it and move on. Pico’s stock may have fallen after the loss, the featherweight knows it is tough being touted as the next superstar as there is an expectation to win every fight.

“I’ve always had that pressure since I was a kid, I’ve been a high-level wrestler. Every fight is going to be watched carefully and fans are going to expect me to win. That just comes with fighting and there would be another person who would love to be in the position I am in. I am surrounded by a good team,” Pico said. “Of course, there is pressure, the pressure is always there and expecting to win and that is the way I feel. That is the way I train and that is why I travel with the best coaches, I go out and perform the way I do. At the end of the day, the more people who are watching you and expecting things, if you don’t like pressure then this isn’t for you.”

Pico has dealt with the pressure phenomenally so far in his young promising career. His next step will be fighting former Bellator bantamweight title contender in Leandro Higo on Saturday at Bellator 206. While it will be Pico’s toughest fight yet, he is excited for the fight as a win over Higo will only raise his stock that much more.

“He is no slouch. He is a very tough guy and I like fighting high-level competition, it just brings the best fight out of me,” the 21-year-old added. “Two, he has fought top level guys and if I get through him, I am slowly building my way to the top. He has fought for the world title on the biggest stage in Bellator and getting a win over him is slowly making my way up.”

If everything goes right for Pico and he escapes the fight healthy the goal is to fight again by the end of the year. For now, however, it looks like Bellator has found their next superstar and Pico is ready to embrace it.

“I am with Bellator for a long time and that’s that.”