Dustin Poirier and Michael Chandler had a heated exchange in the Octagon following their epic battle at UFC 281.

Poirier (29-7 MMA) and Chandler (23-8 MMA) collided on the main card of this month’s pay-per-view event in New York City.

Dustin Poirier had entered the contest looking to rebound, this after suffering a submission loss to Charles Oliveira in his previous appearance at UFC 269. ‘The Diamond’ was looking to return to the form which saw him score three straight wins over Conor McGregor (x2) and Dan Hooker.

As for Michael Chandler, ‘Iron’ had most previously competed at May’s 274 event, where he scored a highlight reel knockout of Tony Ferguson (see that here). Prior to that victory, the former Bellator champion was coming off back-to-back losses to Justin Gaethje and Charles Oliveira respectively.

Poirier vs. Chandler resulted in one of the most thrilling fights of the year. ‘Iron’ had a strong opening couple of minutes but wound up getting dropped by Poirier in the final moments of the opening frame. Round two was then dominated by the former Bellator champion, who controlled and battered ‘The Diamond’ on the canvas. However, in round three, Chandler scored a takedown but was quickly reversed by Poirier. Dustin took Mike’s back and secured a rear-naked choke for the finish. 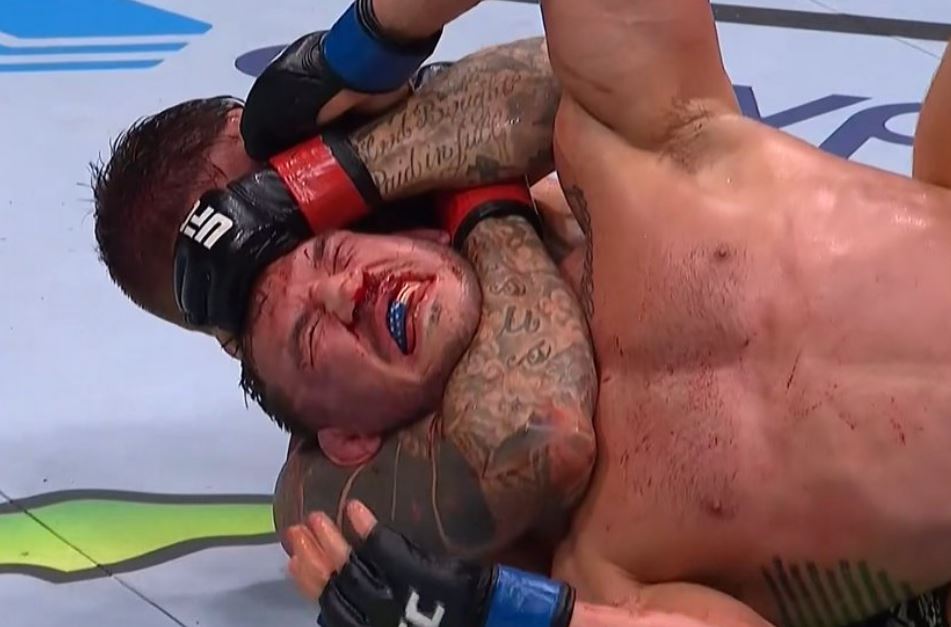 Despite the definitive result, the bad blood between Dustin Poirier and Michael Chandler did not die with the submission.

As seen in the video below, ‘The Diamond’ was quite upset at ‘Iron’ for fish-hooking him during round two of their fight and let his feelings be known.

While Michael Chandler was adamant that he did not mean to fish-hook Dustin Poirier during the post-fight press conference, the Louisianna native was not buying the former Bellator champion’s apology.

“We spoke right after the fight, we spoke immediately after, and dude he’s just a freaking fake dude,” Poirier said on The MMA Hour. “I walked up to him and said hey, respect. It’s kind of blurry in the moment. But, a couple of things I know for sure I said I think I called him, I said you’re (a) nasty motherf****r. I told him that, but I said this is my house. I said I respect everything you’ve done but this is my house that I built. Then he looks at me, he goes – such a freaking dweeb – and goes, what Madison Square Garden is your house? Oh Madison Square Garden is your house? Then he points down to the mat and says oh this logo is your house? I tapped him on the shoulder and said okay bud.”

This article appeared first on BJPENN.COM
Previous articleStevie Ray plans to be the first person to finish former training partner Olivier Aubin-Mercier to win the PFL lightweight title: “We have both submitted each other”
Next articleConor McGregor sounds off on “f**king tick” Joe Rogan and “rat” Khabib Nurmagomedov: “Shut up, Joe. You little fool, you”
© Newspaper WordPress Theme by TagDiv