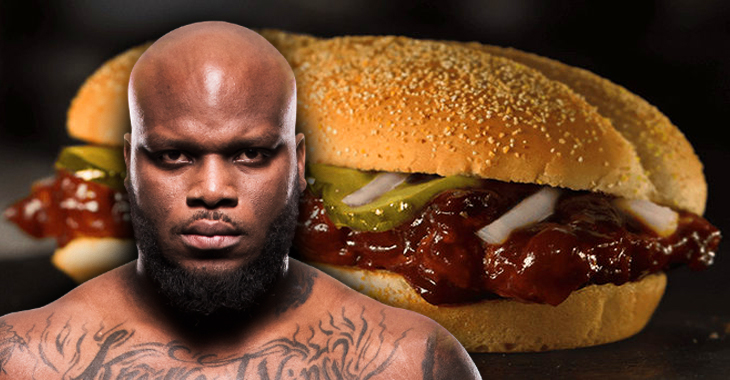 Derrick Lewis has always had a love/hate relationship with training. His relationship with ribs on the other hand, has always been solid. The Black Beast has the biggest fight of his life coming up this weekend against dangerous heavyweight Fabricio Werdum. The perils aren’t lost on Lewis, who finally decided to change his diet leading up to the event. The results are speaking for themselves, but Werdum still has to deal with a dude who’s mad he missed the McDonald’s McRib.

“I was still eating fried chicken, hamburgers, all of that fight week [against Mark Hunt]. The day of the fight, I’ve stayed eating the same way my whole career. Now I’m going to see how I feel however I get in there to see what the difference is to see what all the fuss is about. My mouth is watering right now thinking about some Carl’s Jr. I’m starving right now. You eat salad and you’re hungry the next 30 minutes and you’re hungrier from when you ate the damn salad. That’s what I don’t like about it. The damn McRib was in town. I had to miss the McRib and all the other things. My favorite restaurant had a special going on and I couldn’t even eat it. Somebody’s gotta pay.”

“To be honest with myself, there’s no way in hell I should have lost to Mark [Hunt]. If I would have took that fight serious and train like I have now and my body’s in the same position it’s in now, there’s no way I should have lost that fight. It really lit a fire under my butt because I needed that motivation. I needed something to motivate me, ’cause winning six fights in a row on half-assed training, that really puts you in a different place mentally, especially for a high-level fight like I’ve been doing.” — Derrick Lewis speaking to FloCombat.

It’s not just the meals that Derrick Lewis has sacrificed, he’s changed the way he’s trained. He’s focusing on his conditioning to help power those teeth-rattling bungalows that Lewis throws in his fights. If this beast builds a gas tank that is equally beastly, then the heavyweight division is definitely in trouble. He even took the trip down to Austin, Texas to put in work at Onnit’s headquarters. All the while, he was helping save people from Houston. Fabricio Werdum and Derrick Lewis scrap this weekend at UFC 216. Very happy to be a part of @ufc @thebeastufc team! We are working on unlocking the body with less load during training. Focusing on Manual Decompression/Steel Mace Exercises/Bodyweight Training: Unlocking, Unleashing, MORE BEAST! — Erik Melland from Onnit Academy HQ on his Instagram.