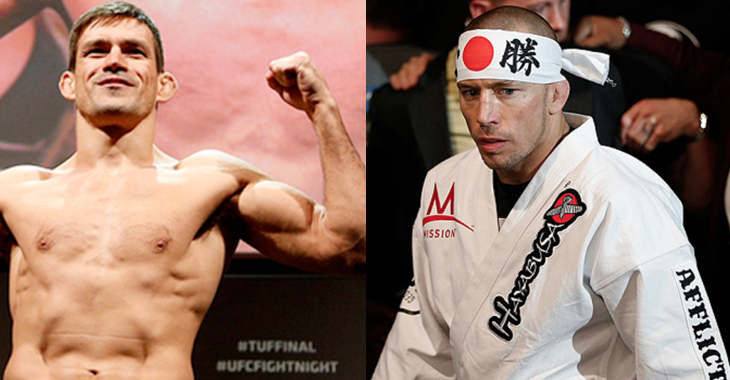 This month, news surfaced that former UFC welterweight kingpin Georges St-Pierre had signed a new multi-fight UFC contract, and would be returning to the UFC for a middleweight showdown with UFC middleweight champion Michael Bisping later this year.

While top ranked UFC welterweight Demian Maia may currently be booked to fight Jorge Masvidal in a fight that many believe could potentially see Maia crowned the welterweight #1 contender, Maia is thankful that St-Pierre chose to return at middleweight, rather than cutting to the front of the line for a welterweight title shot.

“I’m glad they didn’t set up his fight in my weight category,”

“I really wanted to fight for the title, and that’s the fight I wanted to take for sure,” he said. “It was something that was on my shoulders – I was always waiting and nobody was giving me a clear perspective on what is happening. So when they finally said, ‘You need to take this fight,’ we finally solved this situation, and it was also relieving for me.”

Maia will now put his 6-fight win streak on the line when he steps into the Octagon with Jorge Masvidal at UFC 211 on May 13th. Masvidal on the other hand will be stepping into the Octagon on a 3-fight win streak which has seen him pick up back to back TKO wins on the heels of a unanimous decision win over Ross Pearson at UFC 201. Most recently, Masvidal picked up a major win over Donald Cerrone at ‘UFC Fight Night: Denver’ to end Cerrone’s streak at welterweight, and cement his place at the top of the UFC’s lightweight division.

Only time will tell if a win over Masvidal will earn Maia a crack at UFC welterweight champion Tyron Woodley, however it is expected that it will.