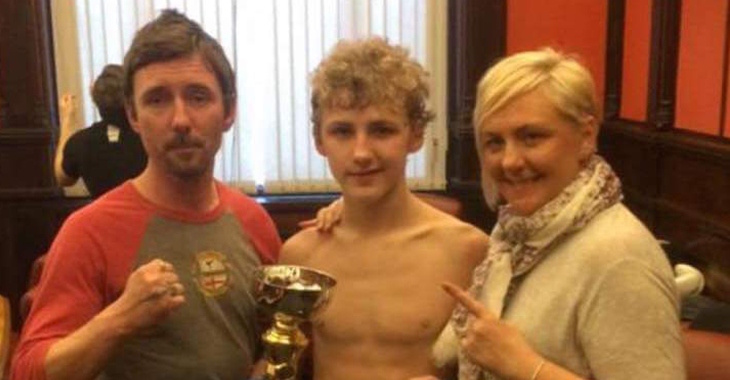 Tragic news has hit the kickboxing community as it became known that 14-year-old kickboxer, Scott Marsden passed away.

Marsden was competing in a national title bout in Leeds, England on Saturday when he collapsed during the bout and was taken to the hospital where he later died.

West Yorkshire Police are making inquiries but the death is not being treated as suspicious. The following was posted by the Marsden’s All Style Kickboxing Facebook page after the 14-year-old was taken to the hospital:

All our prayers and thoughts go out to the Marsden family.
Unfortunately, last nights English title fight had to be stopped due to Scotty needing immediate medical attention.
As this is a sensitive time for the Marsden family I’m sure you will all respect they need space to deal with what has happened and we all wish Scott a speedy recovery
There was no way to forsee The fight ending in such a way as at no point were either ever in any overwhelming danger from each other
The cards showed only 1 point between them in a very close shot for shot fight which could have gone either way on the score cards
Everyone is still in shock as there were simply no signs to suggest the fight needed to be stopped
The referee stepped in to protect Scott as soon as he could which meant Scott did not hit the canvas and was laid down and straight into recovery position
Scott was then taken to hospital to under go tests and scans where is is stable but not out of the woods
Please be respectful towards the Marsden family at this difficult time for them.
I was hesitant to post anything out of respect for the family but i also owe it to them to ensure people give them space but above all prayers for Scott.

Green added, “Not just WKA but the world of Kickboxing is mourning such a well loved and respected fighter and sportsman.

“One of our finest champions in every sense in the ring and true ambassador of the values out of the ring.” A fundraiser has been made to help support the family of Scott Marsden during this difficult time.