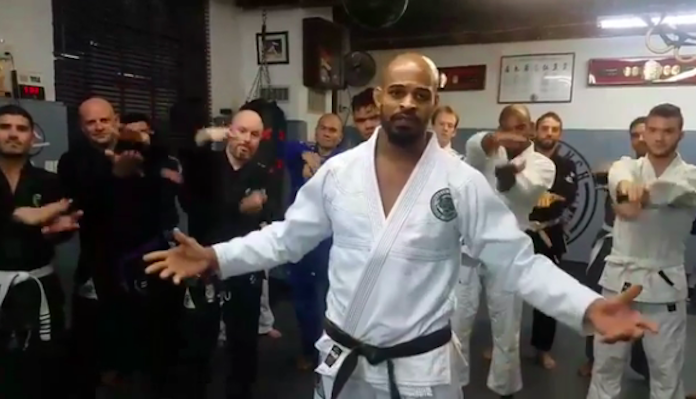 I just want to be clear to everyone I’ve been offered to fight JACARE main event August 22nd in Brazil and he’s not feeling confident enough to take the fight. @arielhelwani @DamonMartin @bokamotoESPN @sherdogdotcom @NewYorkRic @lthomasnews

Officially we were being told by the ufc the man who calls himself the alligator has been neutered @JacareMMA has declined to fight in his Homeland.

“I just want to be clear to everyone I’ve been offered to fight JACARE, main event August 22nd in Brazil, and he’s not feeling confident enough to take the fight,” Branch said in a Tweet on Tuesday.

“Officially we were being told by the UFC the man who calls himself the alligator has been neutered,” Branch added in a second Twett. “Jacare has declined to fight in his Homeland.”

Jacare’s manager Gilberto Faria then confirmed that the Brazilian wouldn’t be accepting the fight, and offered a quick explanation as to why.

“Dave Branch was offered to us twice in 18 months, and Jacare agreed both times, but he jumped ship,” Faria told MMA Fighting. “Jacare wants to fight someone ranked higher in the middleweight division, like rematches with Yoel Romero or Kelvin Gastelum, or a fight with Chris Weidman.

“It doesn’t make sense to fight Dave Branch now,” he continued. “Jacare is not in a hurry, he will sit down like everyone else does and wait for a bigger fight. Jacare has always fought opponents ranked lower than him, and it’s time to face someone ahead of him.”

For Branch, however, this explanation just doesn’t cut it. In a video posted to Instagram, the former WSOF champ made a second, epic, call-out of Jacare — with a little help from his team.

“Jacare,” a gi-clad Branch began. “What’s going on man? What’s up with this fight? Let’s make this thing happen. Let’s get this done and over with. We were supposed to fight two times before, it was short notice, now we’ve got all the time in the world. Right now I’m number seven, you’re number five. You lost your last fight, you’re 0-4 in the top-5, and I won my last fight, stopping a guy on a four-fight knockout streak. Dana White just said something about fighters trying to choose fights that are good for them and bad for them. This ain’t the place for you. You have to make sure that you fight, you know? We’ve got to get this thing going.”

That is how you make a call-out on social media.

Do you want to see David Branch and Jacare fight?