The UFC has parted ways with another sixteen fighters according to recent reports from @UFCRosterWatch on Twitter.

It should also be noted that it has not been confirmed if these moves were outright releases or contracts which were not renewed.

The sixteen fighters recently removed from the UFC roster are listed below:

Barry most recently competed ten days ago at UFC Fight Night 205 where he was disqualified from his fight with Mike Jackson for eye gauging.

Croom most recently competed last month at UFC Fight Night 204, where he suffered his third straight loss at the hands of Heili Alateng.

Else was last seen in action at UFC Fight Night 205 where he suffered a TKO loss to Qileng Aori. That loss marked his second in a row, as he was previously stopped by Kyler Phillips.

‘The Gentleman’ had last competed in February of 2022, suffering a first round submission loss to Ramiz Brahimaj. That setback marked Gilmore’s second in a row, as he was previously TKO’d by Andre Petroski.

Grundy was served his walking papers after suffering his third straight defeat back in March. The Manchester native was submitted in the first round by Makwan Amirkhani.

Hubbard has not competed since August of 2021, where he suffered a unanimous decision loss to Vinc Pichel. That setback was preceded by a decision victory over Dakota Bush.

Jenkins most recently competed at April’s UFC Fight Night 204 event where he suffered a first round TKO loss to Drakkar Klose. The loss marked his second in a row as he was previously defeated by Zhu Rong at UFC Fight Night 192. 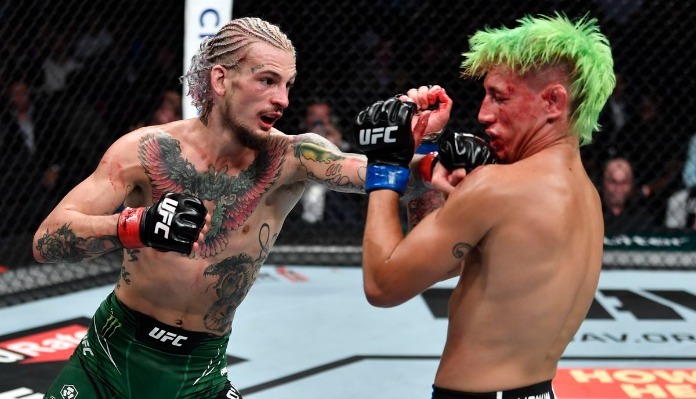 Zhu was let go following a 1-2 run in the Ultimate Fighting Championship. During that stretch the Chinese standout suffered losses to Rodrigo Vargas and Ignacio Bahamondes, while scoring his lone victory (TKO) over Brandon Jenkins.

Smith was let go following a 3-3 stint with the UFC. ‘King Kage’ picked up wins over Julian Erosa, Dong Hyun Ma and Justin Jaynes during his time with the promotion.

‘The Tiger’ most recently competed back in March where he suffered a unanimous decision defeat to Luis Saldana. Souza went 0-2 during his time under the UFC banner.

Strader went 0-2 in the UFC suffering losses to Montel Jackson and Chad Anheliger.

Vargas went 1-3 during his time with the UFC. The Mexican fighter most recently competed back in March where he suffered a first round submission loss to Paddy Pimblett.

Vendramini went 1-3 during his stint with the UFC. The ‘Italian Stallion’ was coming off back-to-back losses to Paddy Pimblett and Fares Ziam.

Ziam went 2-2 under the UFC banner. During that stretch he scored victories over Jamie Mullarkey and Luigi Vendramini, this while suffering defeats to Don Madge and Terrance McKinney.

What do you think of the latest round of cuts made by the UFC?