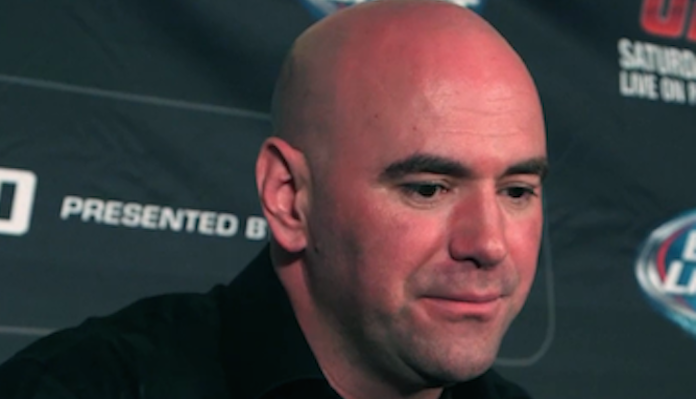 It’s no secret that weight cutting is one of the more unique aspects of being a fighter and it’s not always the easiest thing to nail down. At least for some fighters.

2018 has gotten off to the wrong kind of hot start with more and more fighters missing weight than ever before. There is no concrete reason as to why but many have speculated and put the blame on the early morning weigh-ins that the California State Athletic Commission introduced in 2016. One of those people putting the blame on this weigh-in format is UFC president, Dana White.

White stated on the most recent episode of The UFC Unfiltered podcast that they are, “getting rid of it. We’re looking at taking the weigh-ins back to the way they used to be.”

How the weigh-ins used to be was just that there would be what are currently known as the ‘ceremonial weigh-ins’ which take place in the afternoon and that would be it rather than two separate ‘weigh-ins’.

Since White’s statement, the MMA community has been buzzing.

The early weigh ins were a step in the right direction. I am not a fan of changing it back. Especially because a few idiots don’t have the self discipline to make weight properly 😠

How about we get to weigh in all day, early or late, as long as it’s before ceremonials. Most fighters seem to want to get it over with as quickly as possible.

No matter if the weigh-in is at 9am or 4pm the fighter goes to bed the night before in a dehydrated state. The problem is fighters trying to push the envelope of what weight class they want to compete in. This is why when a fighter misses weight they should be forced to move up https://t.co/1wng18saRb

Sadly no matter what time people weigh in, “uneducated fighters” will always do their same weight cutting routine. From high school to college wrestling and now as a pro fighter, I’ve seen people cutting the same type of way since day 1. Educate yourself or bump up! No excuses!!! pic.twitter.com/PZTVQdKwbH

High School and College Wrestlers make weight 20-30x in a 6-month period and everyone is complaining about PROFESSIONAL ATHLETES who can’t discipline themselves to make weight 2-3x a year. The athletes are the problem, not the system. I’m done with this topic.

Nooooooo!!! I don’t wanna suffer for the sake of other people who can’t plan their weight cuts properly! ;_; https://t.co/GEBKRBDWP7

As an Aussie early weigh ins are normal when the UFC comes to our shores. They were the best thing to happen to athletes across the world. If anything other than early weighs in is to happen it needs to include NO water cuts. Changing back to afternoon weigh ins will do nothing ! pic.twitter.com/ul5A5WhxKv

Added weight classes are really the only answer since people have become increasingly incompetent in weight cutting skills. Seems to mirror society in general. Is there a safe space for weight cutting? Maybe a crying closet? https://t.co/TzNGEuOoYM

Terrible idea to get rid of early morning weigh ins. It is simply a matter of handling your shit vs not handling your shit. Responsible PROFESSIONAL fighters make weight on time. #ridiculousness @MMAFighting @ufc @MMAjunkie @bjpenndotcom

Morning weigh ins are a gift from God. I’ve missed weight on a few occasions and it has NOTHING to do with the time of the weigh in. You need the extra time to rehydrate and rest. Duh. https://t.co/o6QOhoMT4z

Doing away with early weighins would penalize the majority of upstanding athletes for the misdeeds of the unprofessional minority. A better solution would be to continue early weigh-ins at 9a but also allow weights to be certified during public weighins at 4p. @danawhite @ufc

What are your thoughts on the possible change back to the old weigh-in format?