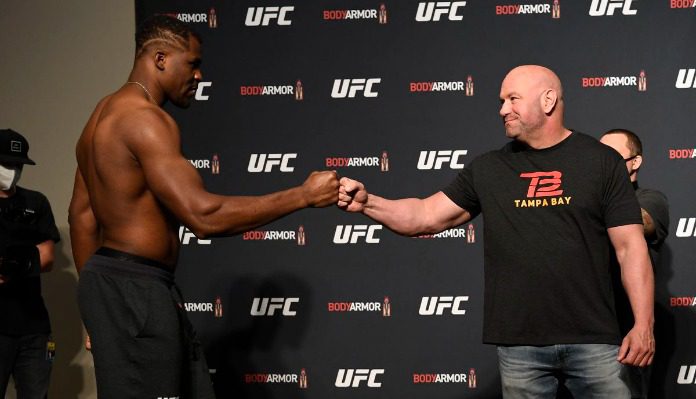 Dana White is speaking out about the current status of negotiations with Francis Ngannou.

White, while speaking about the upcoming UFC 275 event in Singapore this Saturday, June 11th, took some time to discuss Francis Ngannou.

Ngannou (17-3 MMA) last fought in January of this year at UFC 270 where he defeated Ciryl Gane (10-1 MMA) by unanimous decision. It was to be ‘The Predator’s’ 6th win in a row and his last fight under his current contract with the UFC.

A knee injury forced Francis Ngannou out of action following the bout with Gane and after surgery earlier this year, he’s been recovering and rehabilitating.

The UFC was forced to move forward with alternate plans for the heavyweight division because of the injury, but many fans would like to see Ngannou return to defend his crown once he’s fully healed.

Unfortunately Ngannou has an ongoing contract dispute with the UFC & company.  In the lead-up to the UFC 270, Ngannou and the UFC were not seeing eye-to-eye and it was well noted that there was friction when Dana White didn’t wrap the belt around Ngannou’s waist following the event.

Ngannou has expressed his interest multiple times in to stepping out of the Octagon and into the boxing ring with Tyson Fury.

“How’s the relationship there? I mean is it a lost cause, or can we get this man back in the UFC cage?”

“There’s no lost cause, it’s all business, and we’ll see how it plays out.”

Apparently according to White it is all business and ongoing, but he offered no insight into what is next for Ngannou in the UFC.

Would you like to see Francis Ngannou defend his heavyweight crown in the Octagon or are you more interested in watching him step out into the boxing ring?