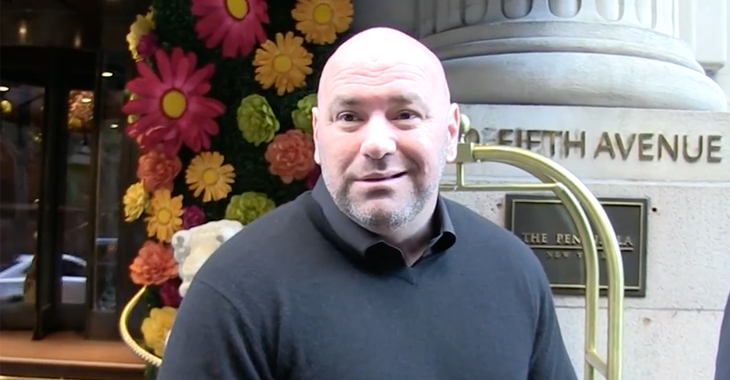 Earlier this week, reports emerged from numerous high-profile news sources that indicated UFC President Dana White was no longer negotiating a potential Conor McGregor vs. Floyd Mayweather fight. The reports followed the news of White finalizing Conor McGregor’s half of the contract several weeks ago, which was expected to then lead to White finalizing a deal with Mayweather’s team.

Since then there have been no updates regarding a potential Mayweather-McGregor fight, however this week a report emerged that WME-IMG executives Ari Emanuel and Patrick Whitesell are the ones negotiating with Al Haymon and Floyd Mayweather’s team, not UFC President Dana White. Those reports didn’t sit too well with UFC President Dana White, who spoke to TMZ to set the record straight:

“We live in a world right now where you can’t believe anything you read,” White said. “When the L.A. Times is putting out – who else would be running the Mayweather-McGregor deal other than me? Who?”

White then went on to discuss reports that had emerged regarding his recent real-estate purchases, which reportedly were made around his neighborhood in order for the UFC President to demolish the buildings to give himself more privacy.

“What does WME know about making big fights? It’s pretty bad. “I’ve had a couple of bad days back to back with ‘legitimate’ news stories – the ‘Las Vegas Review-Journal’ and now ‘The L.A. Times.’ Trust me, I’m running the Mayweather-McGregor deal. I’m the only one in on it.”

While no update regarding the actual fight has emerged, the reports of White being off the McGregor-Mayweather deal also indicated that the potential Conor McGregor vs. Floyd Mayweather boxing match was being targeted for this fall.