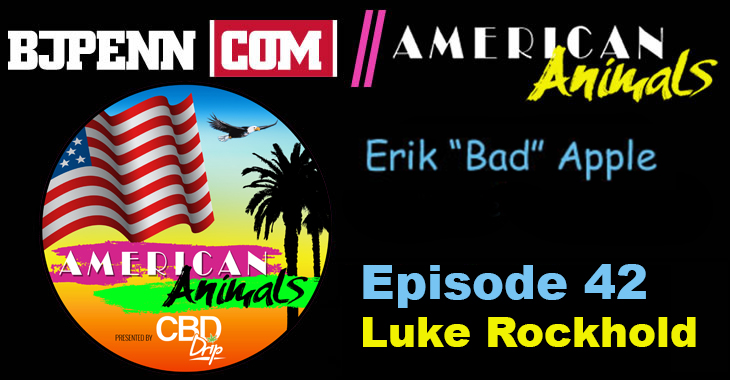 Melendez and Rockhold step inside the octagon with the American Animals.

On this episode of American Animals, Erik Apple and TJ De Santis are here and ready to bring you the biggest and the best in the world of MMA. Plus, the guys bring you two amazing guests in former UFC Middleweight Champion, Luke Rockhold, and Muay Thai specialist, Keri Anne Taylor-Melendez.

Keri Anne Taylor-Melendez (1-0 MMA, 1-0 BMMA) will be making her second mixed martial arts appearance later this month at “The World’s Most Famous Arena,” Madison Square Garden. She will be taking on Sadie Monseratte Williams (0-1 MMA, 0-1 BMMA) at Bellator 180 on June 24 in a strawweight affair which is sure to intrigue Bellator viewers. Keri tells the guys about the added pressure and attention placed on her as the wife of former WEC lightweight champion and three-time Strikeforce champion, Gilbert Melendez. Also, Keri tells us more about the responsibilities that go along with being a parent while simultaneously training to fight at the highest level.

Luke Rockhold joins the show to give fans an update on where he’s been and what he’s been up to since last stepping in the octagon in June of 2016. Listen as Rockhold gives Erik and TJ the 411 on his current situation with Dana White and the UFC and tells us who he thinks will be his next opponent will be, as well as his thoughts on the state of today’s UFC middleweight division.

We are proud to welcome Keri Anne Taylor-Melendez and Luke Rockhold to this episode of American Animals!