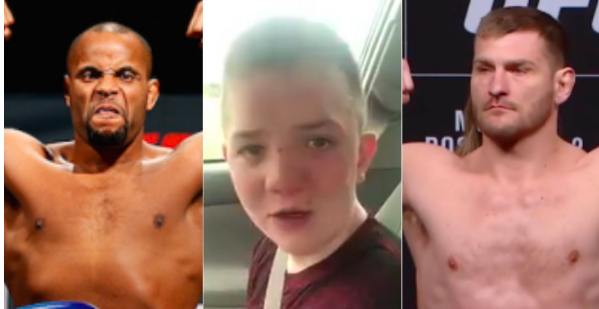 Over the weekend, footage of a young bullying victim named Keaton Jones went viral. In this gut-wrenching video, the teary-eyed boy recounted his many struggles with bullying, which included everything from insults to being doused with milk and food in the cafeteria of his school.

Keaton Jones’ heartbreaking video has taken the internet by storm, as dozens of stars and notables – ranging from Chris Evans to Katy Perry to Justin Bieber – have reached out to him, offering their support.

Among these stars are many members of the UFC roster, and UFC President Dana White, who offered to fly Keaton and his mother out to Las Vegas for a bit of fun with some of the greatest fighters in the world.

Meet Keaton Jones a very smart little boy who is being bullied at school. This video is heartbreaking!! I want to bring Keaton to Vegas and hang out at UFC Headquarters. If anyone knows how i can reach the family please let me know. Thank u everyone pic.twitter.com/BR8c4ldDFc

Thank u all for helping try to find Keaton. 1000% greatest post and response in my social media history. This kid is special and we all feel it. Dying to meet him!!

Keaton, I got your back. I am getting ready for my fight, but say the word and I’m there. Come be a part of of my training camp. You’re not alone. Anything you need I got you! https://t.co/yJY22jq4cd

Keaton you’re great boy and have a heart of gold! Stay strong, @ufc family have your back 👊🏾💥👊🏾💥 https://t.co/ikAM5VzIou

Well, it’s pretty clear all of us fighters here in the @ufc are behind young man. At this point you can pick a state and there’s a @ufc fighter there willing to help. I’ve been in your shoes and Im holding down #Nebraska if you need a friend. Just say the word, Keaton. 🤘🏽👍🏽 https://t.co/E9fILTP52B

Knoxville, can someone get me in touch with this kid? I want him to come train with me when I get HOME. @Lakyn_Jones @ufc @danawhite @seanshelby https://t.co/DRdKvTsIff

Interestingly, Dana White’s Tweet even generated a response from Donald Trump Jr., who offered lodgings to Keaton and his mother, should they choose to take the UFC up on their offer.

This boy is incredibly brave and the video really got to me. @danawhite, If he takes you up on your offer to see UFC Headquarters, I would be honored to host him and his family at our place if they need somewhere to stay. https://t.co/EWx05o0yI0

Needless to say, Keaton Jones has a pretty impressive army behind him. With all of these actors, musicians, and even the UFC heavyweight champion of the world behind him, hopefully his struggles with bullies come to an abrupt and permanent end.