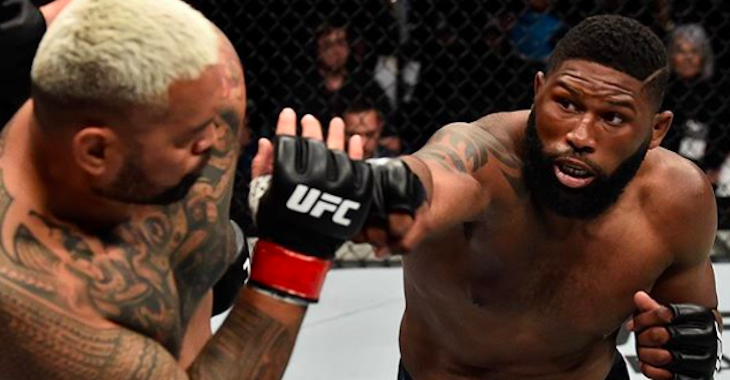 Last night, in the co-main event of the action-packed UFC 221 card, rising heavyweight contender Curtis Blaydes picked up the biggest win of his career thus far, dragging the legendary Mark Hunt through a grappling hell en route to a unanimous decision victory.

That said, Blaydes’ victory wasn’t without close calls. Mid-way through the first round, the Chicago native was very nearly knocked out by his brick-fisted foe. Luckily, he was able to turn the tables on Hunt, completing a crucial takedown as he teetered on the outermost edge of consciousness.

“When he landed those heavy strikes, he definitely rocked me,” Blaydes said at the UFC 221 post-fight presser (h/t MMAFighting.com). “My vision went black for like, two seconds, and I heard my cornermen screaming ‘takedown!’ I knew I should get the takedown and that’s why he was able to get up so quickly because I wasn’t really in it so I got the takedown, it gave me enough time just to recover and then from there I kind of knew my range and I knew where not to be. From there, I knew I had to continue with the takedowns. I knew it would gas him out and help me get the W.”

For Blaydes, of course, the plan was always to wrestle with Hunt. He had no illusions about where his advantages and disadvantages were.

“That was always my game plan. I am not a fool,” he said. “I had no aspirations of standing and trying to bang with Mark Hunt so he can knock my head off. That was always the game plan. I am the better wrestler, why not use it? And I train in Denver, we’re a mile up in the air. There’s no elevation here in Perth, I knew I’d be the better conditioned athlete, I knew wrestling would gas him out a lot faster than standing and banging at his own pace, so I wanted to dictate where we went.”

What do you think is next for Curtis Blaydes after his huge win over Mark Hunt?