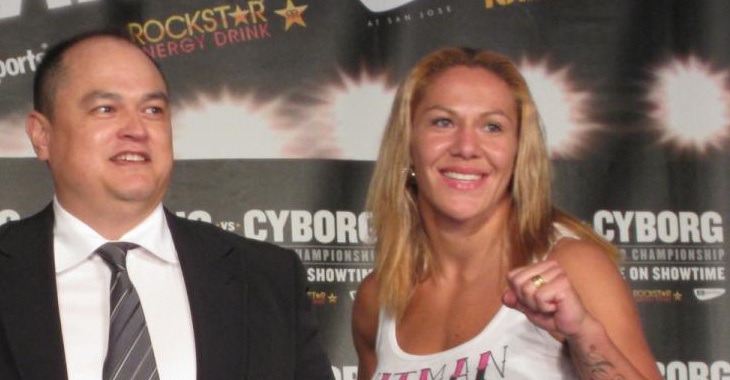 The post-UFC 219 Cris Cyborg saga continues. The question remains, “what’s next?”. Everyone and their mothers have been searching for possible answers. The option that most have been looking at and everyone is seemingly wanting(except for Cyborg herself) is a super fight with the current UFC bantamweight champion, Amanda Nunes. Nunes, as well as UFC President, Dana White, have both openly shared their openness to the huge bout but Cyborg is looking at taking a different step first.

Cyborg has already stated recently that she is open to fighting Nunes…but after she defends against a real featherweight challenger first. She expanded on this recently when appearing on the MMA Hour.

“The belt, 145 pounds, one year they have the belt. But you don’t see any girls fighting at 145 pounds in the division. Just to see girls fight for the belt, 145. They know I want to do this for me, they say ‘we don’t have the girls.’ They have girls. Bellator is signing girls 145 pounds every week.

Every week girls are going to sign with Bellator. Bellator make my division very strong. Going to be big division, my division, in Bellator. This make me sad because I’m in the UFC, but I don’t have all the girls to fight. I can do superfight, but my goal is to make the division grow. I have three fights left, and then I’m going to be where I have to be.”

She also said this on the Split Decision MMA Podcast:

“If you think about it, I’ve has my belt for 145 for like 1 year. They don’t sign any girl 145, they don’t put any girl fights (in my division) on the undercard…They don’t sign any girls 145. How you gonna grow the division if you don’t sign anybody? When Dana White say ahh we don’t have girls for the division. It just sounds crazy to me.Every week I see Bellator sign new girls at 145. They make division for me in Bellator. If I finish this contract, for me to be the real champ at 145 I have to go to Bellator and fight all the girls there.”

It doesn’t come as that big of a surprise that Cyborg would want to go to Bellator who actually has a 145 lb weight class when compared to the UFC. Since the UFC featherweight division’s birth last February, the UFC has only signed one legitimate featherweight fighter in Invicta FC champion, Megan Anderson(Cyborg was signed prior to the inaugural title fight and fighting in 140 lb catchweight bouts). In that timespan, they also signed Cindy Dandois who has a great history at featherweight and above, but when she was with the UFC they signed her as a bantamweight. She lost her debut and was cut shortly after.

Recent stats show that there just haven’t been many featherweights out there to help Cyborg grow their weight class. Maybe it’s just a result of promotors and organizations not investing or just a lack of talent? Perhaps it’s a little bit of both?

Do you want to see Cyborg stay with the UFC or leave to Bellator?