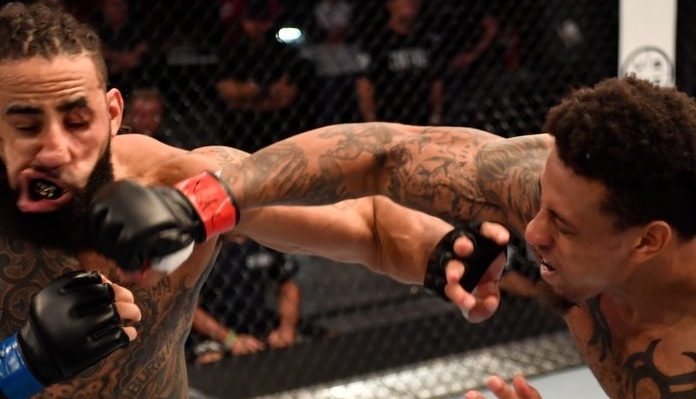 Dana White’s Tuesday Night Contender Series is back and in week 1 of season 2, the prospects delivered with four of the five fights ending via KO/TKO.

Two former NFL players, one pro debut. Greg Hardy and Austen Lane started the action very fast seeing Hardy pressing the action. An eye poke from Hardy halted the action shortly after. Lane followed it with some pressing jabs that got Hardy’s attention. Hardy continued to push forward and soon after landed a big right hook that staggered Lane before he landed a left hook to end the fight just under a minute and get the win in his pro debut.

In the night’s co-main event we had welterweight action as Chris Curtis and Sean Lally met in the Octagon.

After being picked apart for the better part of the first two rounds, Lally would come out in the third knowing that he needed a finish. After landing a couple good shots, Lally started to get controlled on the outside of the cage once again.

Soon after, Curtis would throw up a wicked hook kick that landed and dropped Lally before Curtis finished him with punches on the ground.

The main event of the evening was over before it began. Both Alonzo Menifield and Dawshaun Boatwright walked forward, Boatwright threw a head kick that was countered by an overhand right that took Boatwright off his feet. Menifield followed him to the ground where he would pound out Boatwright to earn an eight-second TKO victory.

The fighter’s that ended up earning UFC contracts in week 1 of season 2 were light heavyweight, Alonzo Menifield, and heavyweight, Greg Hardy.

Results from the rest of the night: