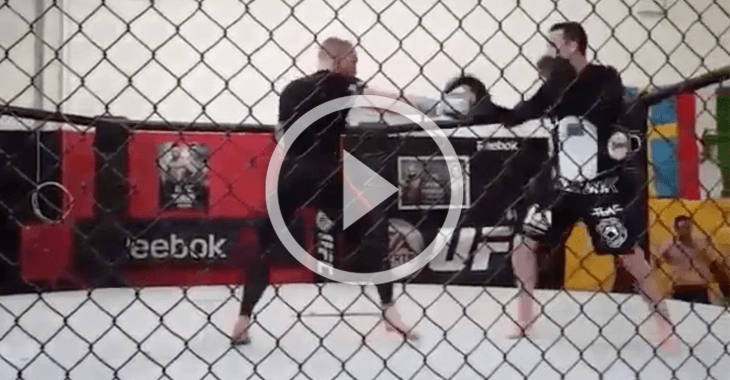 UFC featherweight champion Conor McGregor is looking very sharp ahead of his historic fight against UFC lightweight champion Rafael dos Anjos. Check out the video clip of the training being done in preparation of his superfight coming up. McGregor has a shot to become the first fighter in UFC history to simultaneously hold two division’s championship titles.

“The Notorious” posted two videos to his Instagram account recently of him training for his bout against dos Anjos. He captioned one post, “All day in them @reebok’s.” The other clip he captioned, “Ghost work with @sbgcharlestown!
We’ve been doing this so long now that it will take no more than 1 minute to kill this entire division.
#BewareOfTheGhost”

“Mystic Mac” has had a surreal knack for predicting his fight outcomes and has said that he will finish dos Anjos within one round. He did the same predicting that he would KO former UFC featherweight champion Jose Aldo in one round and sent the former UFC top ranked pound-for-pound fighter to the mat finishing with a highlight knockout in just thirteen seconds at UFC 194. That set a new UFC record for the fastest finish in title fight history.

McGregor, however, has a very tough opponent ahead of him. Joe Rogan recently opined that Rafael dos Anjos is arguably the best lightweight of all time. While many argued with Rogan on his tweet, Rafael dos Anjos is indeed a very tough opponent. Just ask former lightweight champions Benson Henderson and Anthony Pettis, along with game contenders Donald “Cowboy” Cerrone, and Nate Diaz.

Will we see history be made when Conor McGregor takes on Rafael dos Anjos for the lightweight title at UFC 196 on March 5 in Las Vegas Nevada? Share your thoughts on how you see the fight going, and what you think will be next for both McGregor and dos Anjos in the comment section!