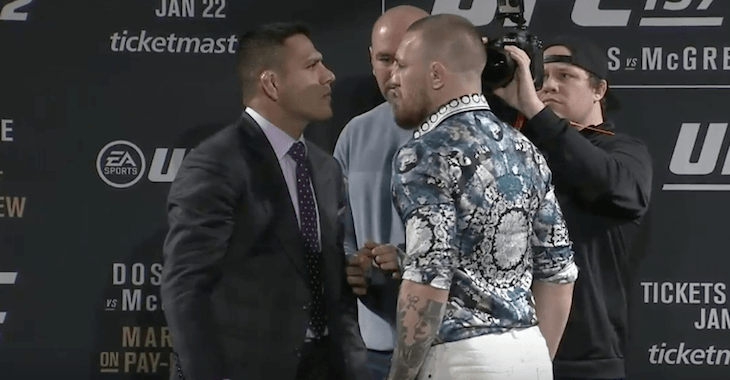 It was the Conor McGregor show at the UFC 197 Press Conference. McGregor who showed up nearly half an hour late to the event was not short on words once getting there. McGregor repeatedly interrupted Rafael dos Anjos as he was answering questions from the media.

One thing many fans were excited to hear was what the latest prediction was from “Mystic Mac.” McGregor has had a mysterious knack for predicting exactly how his fights would end.

One media member posed the question as to how he predicts this fight with dos Anjos will go.

“I believe I will dust Rafael inside one minute. He is a slower, sloppier version of Aldo. He’s like a bum version of Aldo. I believe, in absolutely everything, I believe inside one minute, I will dust him. I will exit the contest, fresh. I will cash the check, and I will sign the new contract for UFC 200, at the brand new MGM, and we’ll go again.”

Do you feel it will be that quick of a night for both Conor McGregor and Rafael dos Anjos? Share your thoughts with us in the comments!