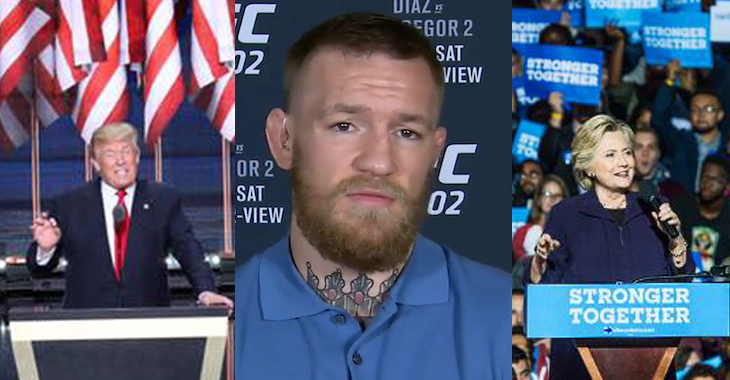 “The Notorious” will challenge UFC lightweight champion Eddie Alvarez for his lightweight title in what will be Alvarez’s first title defense. If the Irishman gets his hand raised over the powerful and tough champ from Philadelphia, he will make history by becoming the fist concurrent two-weight UFC champion.

“The Notorious” has been in New York preparing for the massive event set to take place at Madison Square Garden and spent some time with BT Sport. The polarizing Irish star was asked on election night what he thought of the now newly elected President of the United States, Donald Trump.

“I just could not give a bollocks, to be honest,” McGregor said. “With all due respect, the whole thing is just weird to me. I don’t think whoever wins, anything’s going to change. I think the public are just brainwashed, that this is something that is going to happen with this one.

“I don’t think either of those two contenders or whatever they are, have any power in anything, anyway! But, whatever, it is what it is,” said the UFC champion.

When asked if one day we would see Conor McGregor in politics, the Irishman had an interesting answer.

“Maybe, maybe,” McGregor said with a laugh. “Maybe, but I don’t like to con the people too much so, maybe not.”

What does @TheNotoriousMMA think of @realDonaldTrump? @CarolinePearce caught up with him on #ElectionNight! #UFC205 https://t.co/bQyzcvUbL6

Will we see Conor McGregor make history in New York in the famous Madison Square Garden on November 12 against Eddie Alvarez? Or will the lightweight champion prove to be too much for the featherweight champion and capitalize with a win over the Irish superstar? Share your prediction for the fight with us in the comment section!